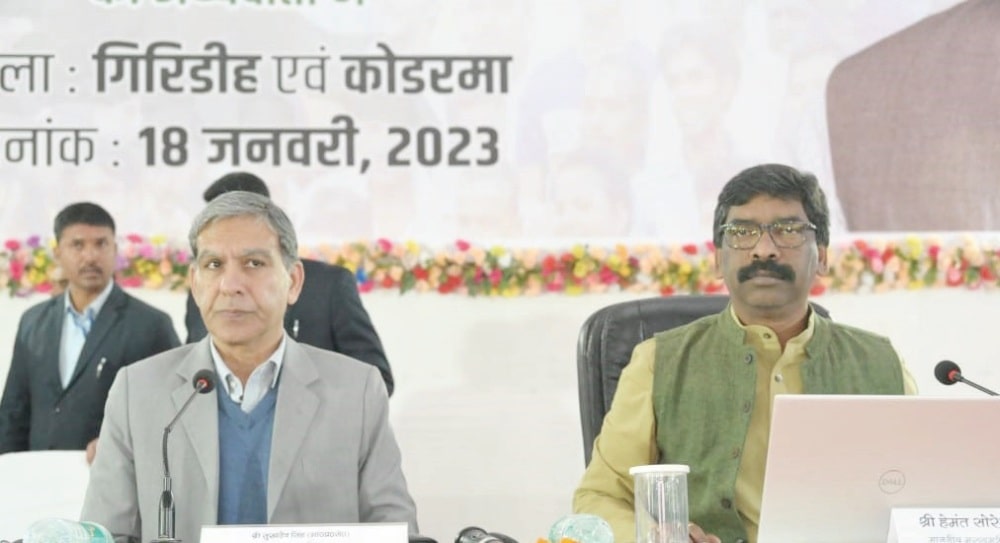 Giridih: Chief Minister Hemant Soren said that the year 2023 is the year of “Implementation” as many schemes of the government are going on which should be implemented properly. While reviewing the ongoing development works and schemes in Giridih and Koderma districts with the officials at Nagar Bhawan in Giridih he said that it is the top priority for the government that the schemes get on the ground and the last line people of the society get its benefits as part of which there will be constant monitoring of ongoing schemes in every district.

Along with the senior officials he himself will go to the districts and review it. If there is any problem, then we will go to the depth of it and solve it so that, the system can be rectified, he said. He asked the officers to work with new enthusiasm in the new year. If the officers of all departments coordinate and discharge their responsibilities and tasks with full loyalty and honesty then surely the government will be able to achieve its vision and objectives.

The Chief Minister told the officials that if they do not do your work properly, anarchy and other incidents including crime will increase in society. In such a situation they themselves will feel embarrassed but he does not want such a situation to arise. You should work hard and fulfill your responsibilities with full honesty so that the entire state gets its benefit he said in his message to the officials.

During the review, the Chief Minister told the officers that they have presented the progress of various schemes here in a very attractive manner but the ground reality says something else. We have to strengthen the roots in reality so that whatever schemes are being implemented by the government they can be implemented in a better way and on the ground, he said. He said that migration from rural areas to cities is continuously increasing. During the Corona period, he came to know that a large number of people migrate from here for work.

He said that he believes that the way urbanization is happening, it is a big challenge for all of us. There are facilities in the cities but there are more problems than that. Even today people in villages can go anywhere without locking their houses, but this is not the case in cities. For this reason, the government is laying special emphasis on strengthening the rural economy he pointed. Hemant Soren said that the government is making efforts to ensure that the kind of facilities people are getting in the cities should be available in the rural areas as well.

He said that connectivity like electricity, water, road and internet is being strengthened in the villages so that the villagers can get its benefit in their own villages. He said that it is true that one cannot stop the migration from the state but such a system can definitely be set up where such work or employment can be made available to the people for which people turn to other states but for this there is a need to work with complete honesty.

The Chief Minister said that 45 percent of the total budget of the state is spent on the salaries of government officials and employees. If we talk only about Giridih and Koderma districts, there are about 450 panchayats, while the number of officers and employees working in various departments would be more than 10,000. Even after this, if there is no expected development of Panchayats, then it is a matter of concern. We have to change such situation and in this, the officers and employees will have to discharge their functions in a better way he said.

He said that the cooperation of banks is very important for better implementation of various programs and schemes going on in the state. But, the expected cooperation of the banks is not available. Chief Minister said that tribals and Dalits have a large population here yet they face difficulties in availing benefits of government schemes due to the inaction of banks. I will convey this matter to the Central Government so that the State gets full cooperation from the banks.