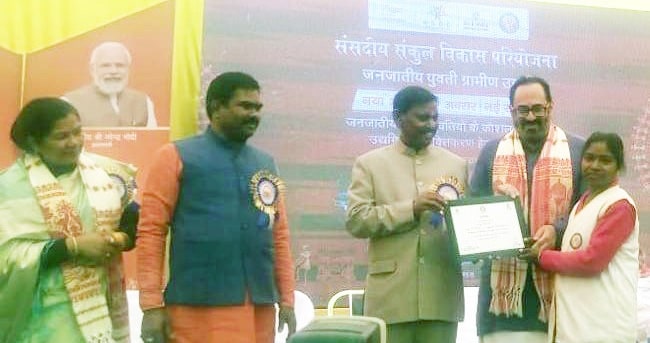 Gumla: Union Minister of State for Skill Development and Entrepreneurship and Electronics and Information Technology Rajeev Chandrasekhar said on Wednesday that under the leadership of Prime Minister Narendra Modi the Central Government is working in this direction that there should be new opportunities for all in New India.

The Minister of State, who arrived as the chief guest at a program in Gumla’s Bishunpur block, said that the Central Government is running programs for skill development and entrepreneurship today with the slogan ‘New India, New Opportunities and New Prosperity’.

He said that Prime Minister Narendra Modi had started the Skill India program in 2016, at that time it was in his mind that it should create new opportunities in the coming days which would bring new prosperity. He informed that about 5 crore youths and women have been provided skill training under Skill India.

Referring to the objective of the Skill India Mission Rajeev Chandrasekhar said that due to the creation of more and more opportunities at the local level, people will not have to migrate. He further said that Prime Minister Narendra Modi’s resolution regarding self-reliant India will be fulfilled only through self-reliant villages, panchayats and districts.

The Minister of State said that the change that has taken place in the country during the nine-year tenure of Prime Minister Narendra Modi reflects the new India. He said that there is an opportunity for everyone in this new India.

Today our Prime Minister has a resolution that every Indian should have a chance to move forward. Let us move forward with everyone’s support, everyone’s development, everyone’s faith and everyone’s efforts.” Organized by Vikas Bharti, certificates were awarded to over 200 tribal women who successfully completed training under the third phase of the Rural Entrepreneurs Training Initiative through the Skill India Mission and the Parliamentary Complex Development Project. Rajeev Chandrasekhar, while wishing them good luck, narrated two true stories of skill opening doors to new opportunities and prosperity.