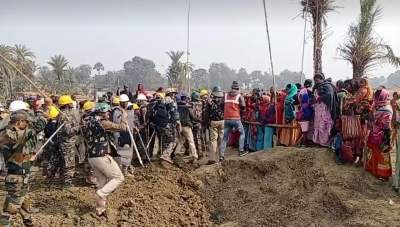 Ranchi (IANS) Five security personnel including Mahagama's SDPO Shivshankar Tiwari and about a dozen villagers were injured in a clash between security forces and local tribals on Thursday during the demarcation of land for the ECL coal project in Godda district.

While the tribals attacked with arrows and stones, the security forces lathi-charged them. Water cannons and tear gas were used to disperse the crowd. There is also information of aerial firing. More than a dozen villagers have also been taken into custody.

Amid the sloganeering by the villagers, the officials of ECL (Eastern Coalfields Limited) started demarcation and levelling of land on the acquired land in Taljhari village with the help of bulldozers and JCBs. Godda DC Jishan Qamar and SP Nathu Singh Meena are also camping at the spot.

On Wednesday, a team of ECL and administration officials along with 1,000 police and security force personnel had reached Taljhari village for demarcation of the land. Thousands of women, men and children gathered in protest with traditional weapons, sticks and rods.

The entire locality echoed with the slogans of 'will give life, will not give land' and 'go back police administration'.

Prohibitory orders under section 144 were also imposed in the entire area on Wednesday. The administration officials tried to pacify the protesting villagers by talking to them, but to no avail.

ECL has acquired 125 acres of land in Taljhari village of Boarijar block during the last five years for expansion of its Rajmahal coal project. Since 2018, efforts are being made by ECL to start the process of mine expansion there, but due to strong opposition from the surrounding villages including the ryots of Taljhari, coal mining could not be started there till now.

During the attempt to demarcate the land, clashes between the villagers and the administration have broken out more than 18 times so far. Six months back, the CMD of ECL, who had gone for talks in Taljhari village, was taken hostage by the villagers. Later, with the intervention of the district administration, he was safely freed from the clutches of the villagers.

On the other hand, ECL claims "The ryots whose land have been acquired here have been given compensation of more than Rs 10 crore so far. 22 ryots have also been given jobs in the Rajmahal project. Despite this, it is not right to oppose the expansion of the project."

Two power plants of NTPC are run on coal from ECL's Rajmahal project. ECL is no longer able to supply coal to Kahalgaon and Farakka plants as per the demand.

The existence of the Rajmahal project will be saved only after the mining starts in Taljhari, but the tribal ryots of Taljhari say that if they are removed, there will be a serious crisis of livelihood in front of about 200 families.