Kumaraswamy told to face floor test by 6 p.m. on Tuesday 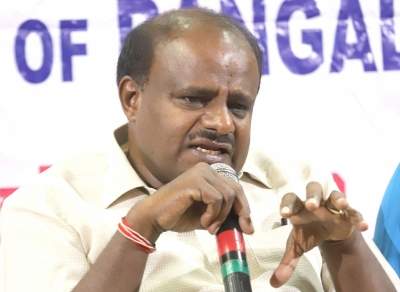 "I am adjourning the House nearly at midnight to meet again on Tuesday at 10 a.m. for concluding the debate on the confidence motion by 4 p.m. and holding the floor test by 6 p.m.," Kumar told the members and left the Assembly premises in a huff.

The opposition Bharatiya Janata Party (BJP) members, who waited since morning for the crucial floor test, protested against the Speaker for adjourning the session without the floor test, he promised them on Friday and throughout the day.

"The Speaker betrayed us again by adjourning the House without the floor test for the fourth time since July 18 after assuring us that he would not defer it beyond Monday," a weary and grim-faced BJP leader B.S. Yeddyurappa told reporters outside the Assembly.

A miffed Speaker asked Congress Legislature Party (CLP) leader Siddaramaiah how much more time the ruling allies would need to conclude the debate on the motion for the floor test.

When the former Chief Minister said the ruling allies would complete the debate by 6 p.m. for the floor test by 8 p.m. on Tuesday, the Speaker advanced it (trust vote) by 6 p.m. and to end the debate by 4 p.m.

The Chief Minister moved the confidence motion on July 18 to prove majority after the 14-month fledgling JD-S-Congress coalition government was reduced to minority following the resignation of 15 rebel legislators of the ruling combine and withdrawal of support by two Independents in the 225-member Assembly, including one nominated without voting right.

Earlier, a tense Kumaraswamy beseeched the Speaker for two more days to face the floor test after his reply to the motion.

"In view of the fast-changing circumstances since July 19 and a few petitions coming up in the Supreme Court on Tuesday for hearing and ruling on issues concerning our parties and the state, we request you to defer the floor test to Wednesday," Kumaraswamy told the Speaker.

Admitting that Congress Legislature Party (CLP) leader Siddaramaiah and he had assured the House on Friday of completing the debate for the floor test on Monday, the Chief Minister alleged that a fake resignation letter with his forged signature and address to state Governor Vajubhai Vala was being circulated in the social media like WhatsApp, Twitter and Facebook since late evening when he was in the Assembly.

"I don't know who is so desperate for my resignation that a fake letter was prepared with my forged signature and shared in the social media. It also made it to the print and electronic media, which brought it to my office's notice. This mischief needs to be investigated to find who all are behind this," Kumaraswamy told the Speaker in Kannada.

Even as the ruling members were on their feet for adjourning the session, Kumaraswamy and Deputy Chief Minister G. Parameshwara left the House quietly as they left the debate on the motion to the Speaker.

Congress state president Dinesh Gundu Rao said the top court has listed for hearing on Tuesday the petitions filed by his party, JD-S, chief minister and two Independents on issues pertaining to the coalition government, the trust vote, the July 17 interim order of the three-judge bench, saying the 15 rebel legislators who resigned cannot be compelled to attend the session for the floor test and the Governor'S three messages to the chief minister to prove his majority on July 17 and July 18.

With the 15 rebels, including 12 of the Congress and 3 of the JD-S deciding not to attend the session and two Congress legislators (B. Nagendra and Srimant Patil) admitted in Bengaluru and Mumbai private hospitals, the strength of the allies in the House was 99 (65 out of 79 of the Congress plus 34 out of 37 of the JD-S), including the Speaker (from Congress) in the 225-member Assembly.

With the two Independents supporting the BJP, which has 105 legislators, 107 votes will be against the motion in the division of votes vis-a-vis 100 of the ruling combine, including N. Mahesh of the Bahujan Samaj Party (BSP).

"The voting takes place on the basis of the members present in the House. But with only 100 members on his side, Kumaraswamy will inevitably face defeat when the motion will be put to vote, as the new halfway mark will be 105 out of 208 (225-17)," BJP spokesman G. Madhusudana told IANS here.