Exit polls indicate Congress issues of corruption, welfare may not have clicked 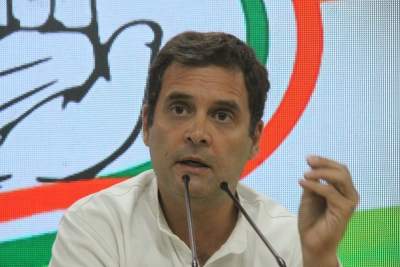 New Delhi (IANS) The prediction by the exit polls about dismal performance by the Congress suggests that the party got it all wrong and the issues like the Rafale deal, NYAY, unemployment and alleged "arrogance" of Prime Minister Narendra Modi raised by it during the election campaign failed the impress the voters.

The exit poll results indicate that not only did it get the poll plank wrong, but it also made strategic mistakes like being late in stitching an alliance in Bihar and failing to be a part of the 'gathbandhan' of Samajwadi Party-Bahujan Samaj Party-Rashtriya Lok Dal in Uttar Pradesh, where the maximum number of 80 seats were at stake.A

The BJP's thrust on nationalism, performance and delivery seem to have scored heavily over the thrust of the Congress campaign to primarily target the Prime Minister and raising questions over economic issues.

Congress President Rahul Gandhi repeatedly raised the issue of alleged corruption in Rafale fighter jet deal, unemployment and Modi government's "attack' on Constitutional institutions even as the Prime Minister kept changing tack to keep a fresh line of attack and set the narrative, with focus on nationalism and 'strong government'.

Gandhi apparently believed he was eroding credibility of Modi but exit polls indicate that his strategy may not have succeeded and the issues apparently did not resonate at the grassroots level.

The Congress apparently could not set the narrative during the elections and did not come up with a sustained agitation on any of its favourite issues to chip at Modi's "strong leader" image.

The party's campaign against the Modi government on the Rafale deal was also hit when Gandhi misquoted the Supreme Court for which the top court forced him to apologise.

A Congress functionary acknowledged that the party's campaign was damaged by Gandhi's Aapology Ato the Supreme Court for wrongly attributing his "chowkidar chor hai" slogan to the court over his allegations of corruption in the Rafale fighter jet deal.

"It happened in the middle of the election campaign," said the functionary, who did not want to be named. And the BJP used it appropriately in its favour.

An opposition leader, who spoke on the condition of anonymity, said Rahul Gandhi should not have endlessly referred to Modi as "chor" in reference to the Rafale deal as such remarks are not appreciated by people.

"I think he started too early with this kind of attack. He could have attacked Modi in other ways," the leader said.

A Congress leader said that Uttar Pradesh appears to have remained a weak spot for the party as it was not part of 'gathbandhan' of Samajwadi Party, Bahujan Samaj Party and Rashtirya Lok Dal.

However, he said the party had no option but to fight alone as SP and BSP did not talk to Congress before announcing their alliance.

In Bihar, it was wrestling for seats between Congress and Rashtriya Janata Dal which delayed announcement of alliance. The alliance was also riddled with fissures. RJD put up a candidate against Congress in a seat in Jharkhand and Congress General Secretary Shakeel Ahmed, who was later suspended, also entered the fray as an Independent from Madhubani.

Gandhi lay a lot of thrust on Nyay, an ambitious scheme which promises to provide Rs 72,000 every year per family to 20 per cent of country's population but it was apparently undercut by PM-KISAN programme announced by the Modi government. The scheme Aprovides direct income support at Rs 6000 per year to vulnerable landholding farmer families.

While information about Nyay may not have effectively penetrated among the intended beneficiaries,A government ensured that instalment payment of Rs 2000 (due every four months) reached as many targeted people asA possible.

PM-Kisan was launched after BJP lost power in Chhattisgarh, Madhya Pradesh and Rajasthan and unhappiness among farmers was perceived to be one of the reasons for its losses.

Rahul Gandhi appointed his sister Priyanka Gandhi as general secretary in January but it appeared to be too close to the general election for her to make a decisive impact to party's fortunes in the state.

After the exit polls, noted political commentator Yogendra Yadav tweeted last night:"The Congress must die. If it could not stop the BJP in this election to save the idea of India, this party has no positive role in Indian history. Today it represents the single biggest obstacle to creation of an alternative".

In another tweet later, he said, "My expression 'no positive role in Indian history' may have caused some confusion. I cannot possibly deny the great role of Congress before and immediately after independence.What I meant was 'no positive role left to perform in history anymore'. Stand by that."

Congress leader P.C. Chacko said one would have to wait for results on May 23 to make any comment about the party's performance.

"We not not know if predictions are true. There could be many contributing factors (if the party does not perform to its expectations). There are many other issues also.A The party will have to make an assessment ," he said expressing his personal opinion.

He was asked if the party had relied too much on the Rafale deal issue and if non-inclusion in mahagathbandhan were contributing factors if the results are according to predictions of exit polls. A

Chacko said that in five states including Gujarat, Maharashtra, Madhya Pradesh, Chhattisgarh, Athe BJP should have gone down by 100 seats but they appear to have maintained their seats. "That was not expected," he said.

Congress spokesman Sanjay Jha said the party was convinced that UPA will be ahead of NDA after the final results are counted on May 23.

"The key to the election is the silent voter of India who has chosen to not express himself or give a wilfully convenient popular response . The atmosphere of fear and insecurity in particular for those who belong to the marginalised communities and the minority sections is alarming," he said.

"Thus, all exit polls appear terribly skewed. That's why there are very divergent figures appearing from those sensitive states which have seen intense polarisation," he added.

BJP spokesperson Nalin Kohli said every exit poll indicates the return of Prime Minister Modi heading a BJP-led NDA government for a second term and "it confirms that the voter approved his leadership, the performance of the past five years and the vision for the future".

"On the other side, the opposition, in the absence of clarity about leadership and lack of a definitive agenda could only present a negative narrative of personal attacks . The reliance on falsely manufactured narratives also cannot cut ice where facts are to the contrary", he said.

Exit polls released on Sunday predicted that the Congress will improve from its lowest tally of 44 seats it won in 2014 but not sufficiently enough to mark a revival at the national level.

According to predictions of several exit polls, Congress may not cross the three-digit mark.

The News 18-IPSOS poll predicted that the Congress will be barely able to improve its tally by two seats from its 2014 tally. Going by this prediction, the party would again not get Leader of Opposition status in the Lok Sabha.

Congress is the lead party of United Progressive Alliance (UPA).

The prediction for UPA numbers also suggest that Congress is not likely to do very well in the polls.