It is necessary to work continuously to meet the increasing energy needs: Alok Kumar 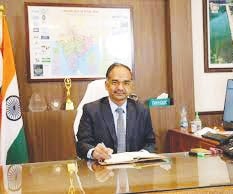 During the inspection, the secretary took stock of various development works and discussed with the officials to know about the future plans. During this, he emphasized that they will have to work continuously to meet the increasing energy needs.

After inspecting the Banadag railway siding, they both reached the Coal Mines. There they met the women dumper drivers who have brought laurels to Jharkhand as well as the country and inquired about their work. Praising the excellent work done by the women dumper drivers, the Energy Secretary said that they are an example for society.

Both the officers also inspected the mines and understood its various nuances very well. After completing the inspection they reached the office of NTPC Pakri Barwadih Coal Mining Project at Sikri, where he along with various NTPC officials took stock of the premises by planting saplings.