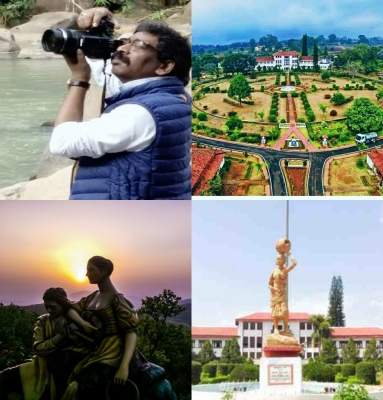 Ranchi (IANS) Watching the rising and setting sun at the monument of love in Netarhat, Jharkhand is a serene experience for the tourists visiting the place, which is surrounded by beautiful lush green hills, waterfalls and tall pine trees, that led to it being known by the Britishers as Nature's Heart.

Over time, Nature's Heart came to be known as 'Netarhat'.

This New Year the monument has seen a beeline of tourists. Many Indians and foreigners reached the spot to mark the beginning of their new year with a calming sunrise. All the hotels and guesthouses in the area are completely booked due to the rush of tourists.

The tourists find their way back to the monument not only because of its ethereal scenery but also because of the love story that has resonated in the plains for years in Magnolia Point.

Located at an altitude of 3,761 feet above sea level, the place holds a statue of a tribal boy and a British girl, the love story of whom has been narrated over the years.

It is believed that during British rule, an English governor along with his family visited Netarhat due to its natural beauty and built a residence there.

Magnolia, the governor's daughter, fell in love with a tribal shepherd after she heard the mesmerising sound of his flute.

Their love blossomed, but the Governor raised his objections when he came to know about it and asked Magnolia to stay away from the shepherd.

When she did not agree to his demand, her father got the shepherd killed and asked his men to throw his dead body in the valley.

Devastated by the news, it is said that Magnolia rode her horse to the huge rock where her lover played his flute, and jumped to her death.

The place came to be known as Magnolia Point and is regarded as a memorial of their love.

Spread over 2,489 square metres, in Latehar district, about 150km from Ranchi, Netarhat enjoys a pleasant climate throughout the year and is also known as "Queen of Chotanagpur".

Senior journalist Shahroz Qamar said that although there is no written account of the love story, it is certain that tourists are enchanted by the area, surrounded by rivers, waterfalls and mountains.

The best way to reach the destination is by road which offers a splendid view. Tourists also visit a place called Koyal ViewPoint to watch the sunrise.

The mountains and waterfalls located nearby attract a lot of people here. These waterfalls are known as Lower and Upper Ghaghri Falls.

Lodh Falls, also known as Buddha Ghagh Falls, is located at a distance of 61km from Netarhat and is the highest waterfall of Jharkhand. Water falling from such a great height creates an illusion of it falling directly from the clouds.

Netarhat's Residential school has received accolades at the national level. Thousands of students from here serve on top positions in various fields of the country and abroad.

So far, about 3,000 of its students have been selected for IAS-IPS and other civil services.

Previous ArticleRanchi district administration steps up security for New Year’s eve, deploys 4,000 cops across city
Next Article Soren-led JMM on a strong wicket in Jharkhand despite challenges
Must Read