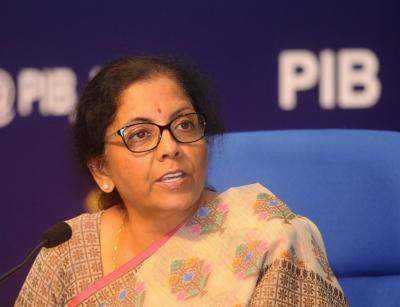 Chennai (IANS) Amid the economic slowdown plunging August sales of automobiles to the lowest since 1997-98 indicating further worsening of demand and investment, Finance Minister Nirmala Sitharaman will elaborate on the decisions and initiatives taken by the Modi2.0 government in last 100 days.

She will address media on "Furthering Development -- 100 days of bold initiatives, decisive actions of the government".

The Q1 GDP growth has fallen to 5 per cent, slowest in six years. Growth is down compared to the 5.8 per cent recorded in Q4 FY19 and the 8 per cent that the Indian economy hit one year ago in Q1 FY19.

On Monday, Industry body SIAM figures revealed that monthly passenger vehicle and car sales recorded their steepest fall ever in August, highlighting the continued slowdown in the sector amid assurances by the government for revival.

Continued selling of domestic equities by foreign investors remain a drag on the rupee though on Monday, the Indian currency strengthened to as much as 71.50 against the US dollar (USD), but later pared gains to end marginally higher. Opening at 71.67 a dollar, the rupee traded in the range of 71.50 to 71 .73 against the US dollar, as compared to its previous close of 71.72.

Forex traders will be looking ahead to ECB's rate decision on Thursday and US Federal Reserve rate decision is also due next Wednesday.

Financial markets will remain closed on Tuesday for Muharram. FIIs remained net sellers in the capital market, pulling out Rs 188.08 crore on Monday, according to provisional exchange data. FPIs pull out Rs 1,263 crore in first week of September despite surcharge reversal

The central bank reduced its policy rate to 5.40 per cent on August 7, and has lowered the rate by 110 basis points this year.

FPIs pull out Rs 1,263 cr in first week of September despite surcharge reversal.

Last week, Road Transport Minister Nitin Gadkari assured the crisis-hit automobile sector of all possible support from the government, including taking up the demand of Goods and Services Tax (GST) reduction with the Finance Minister.

Sitharaman also said the government will unveil measures to revive economic growth that has slowed to a six-year low.

Last month, she announced a partial rollback of the enhanced surcharge on foreign portfolio investors (FPI) levied in the Budget. The other measures included ICE (internal combustion engine) vehicles will coexist with EVs (electric vehicles) and that there is no phasing out of ICE vehicles -- a fear expressed in certain quarters of the auto industry.

The government also announced mega consolidation in banking sector reducing 10 PSU banks into 4 and also infusing Rs 55,250 crore capital in many of them to enforce regulatory norm adherence.