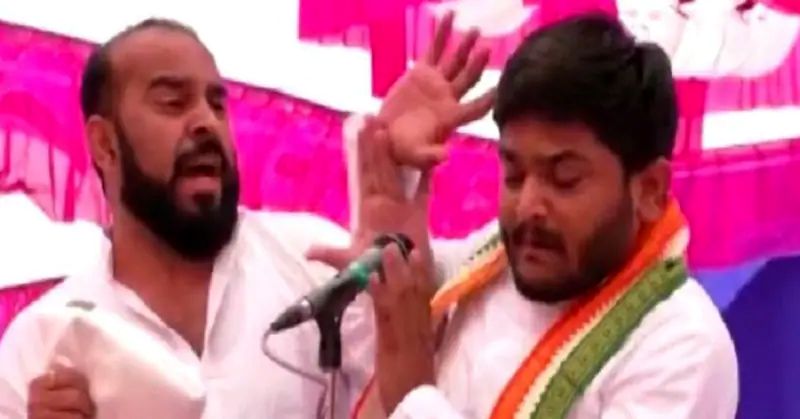 Ahmedabad (IANS) Firebrand Patidar leader Hardik Patel was on Friday slapped at a public meeting in Surendranagar district in Gujarat by a man who alleged Patel was playing politics with the sentiments of the community.

Patel was addressing an election rally described as a 'Jan Aakrosh Sabha' at Baldana village when a man identified as Tarun Gajjar from Kadi town in North Gujarat climbed up the stage and slapped him.

An angry Gajjar was heard saying that 14 Patidar youngsters had been killed in 2015 during Hardik Patel's agitation for reservations to the community but now the latter was playing politics over it.

Gajjar is a BJP worker and is known to be close to Gujarat's Deputy Chief Minister Nitin Patel. IANS is in possession of a soft copy of an invite sent by Gajjar for a function which was to be attended by Nitin Patel.

Gajjar was later overpowered by Congress workers who thrashed him and took him away from the venue of the rally.

Hardik Patel, who later lodged a complaint at the Wadhvan police station, said: "This was the handiwork of the BJP, and the party may someday send someone to shoot me but our fight will continue."

Patel, who had launched his agitation in 2015, joined the Congress last month and has emerged as a star campaigner for the opposition party, which has allotted him a helicopter to tour Gujarat and hold election rallies.

On Thursday, he had to cancel his helicopter ride to Lunawada in Mahisagar district in central Gujarat when farmer Vinay Patel on whose field the helicopter was to land refused permission on the same reason that Hardik Patel was "playing politics over those killed".

Patel later travelled by road to Lunawada, some 100 km from Ahmedabad for his election rally.