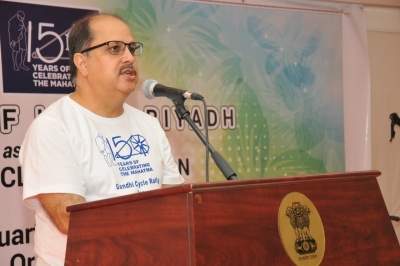 Hyderabad (IANS) Saudi Arabia is looking at India as a dependent partner for its food security the same way as India depends on the Saudi Kingdom to fulfill its demand for crude oil and LPG, says India's ambassador to Saudi Arabia, Dr Ausaf Saeed.

He told IANS in an exclusive interview that the Kingdom has identified India as the best destination to source rice, red meat, sugar, spices and infant milk powder.

He noted despite the fall in India's fuel demand due to Covid-19 lockdown, there was no decline in the country's crude oil imports from Saudi Arabia.

The ambassador believes that despite the challenges posed by Covid crisis, there are huge opportunities for strengthening bilateral cooperation.

Excerpts from the interview:

Q: What has been the impact of Covid situation on the plans to strengthen the economic ties? Do you see any opportunities in this crisis?

A: There are a lot of opportunities. In fact in March our PM had a video conference with the Saudi Crown Prince during which the two countries decided that within the G20 framework they will work together in all aspects, including the research in combating pandemics like Covid, healthcare and technological innovation.

Within the bilateral framework also Saudi Arabia depends on India for food supplies mainly rice and pulses. As India depends upon Saudi Arabia to fulfil our demand for crude oil and LPG, the Kingdom looks upon India as a dependent partner for its food security. It is looking at different ways of partnering with India on the food security front. The Kingdom has identified India as the best destination to source rice, red meat, sugar, spices and infant milk powder -- 75 per cent of basmati rice consumed here is imported from India.

The Saudi Agricultural & Livestock Investment Company (SALIC), owned by Public Investment Fund is acquiring stakes in Indian exporters, to secure agro-products in cases of emergency situations. SALIC recently invested $17 million to buy shares in LT foods, which owns the ï¿½Daawat' brand of rice and is also in discussions with Allana Foods. SALIC is also working to invest in warehouses in SEZs, to ensure hassle-free ï¿½field to fork' supply.

The Embassy is also working closely with APEDA, Spices Board, MPEDA and other such entities in India to ensure steady supply of Agro-commodities and marine products.

There are great opportunities for Indian pharma companies to come to Saudi Arabia. During the current crisis, Saudi private companies and government hospitals were facilitated to get the supplies of Hydroxychloroquine and paracetamol from India.

There are huge opportunities in the automobile sector as well. Lot of vehicles that are imported into Saudi of international brands such as Ford, Hyundai, Nissan, etc are from these companies' plants in India. In addition, Indian companies such as Tata Motors, Mahindra & Mahindra and Ashok Leyland have an active presence in the Kingdom. Saudi clients had placed orders for around 400 units of trucks and pickups from Indian in the beginning of the year.

Saudi Arabia is India's fourth largest trade partner. The total bilateral trade is $34 billion. According to Saudi data for 2019, there has been a 15 per cent increase in India's exports to the Kingdom that is an increase of $800 million.

Q: You recently completed one year in office and how do you look at the progress made in strengthening the bilateral ties?

A: It started well last year with the Prime Minister's visit in October. During 2019 a lot of things were achieved, including strategic partnership. We were hoping to carry forward the momentum in 2020 because 2020 is very important for Saudi Arabia as it is the chairman of G20 and for the first time the G20 conference has come to the Arab World. Unfortunately, 2020 witnessed a lot of other developments one after the other. Before Covid it was fall in oil prices.

Q: What has been the impact on Indian oil imports from Saudi Arabia?

A: India imports around 40 million metric tonnes of crude oil from Saudi Arabia costing $24 billion annually. This fulfils India's 18 per cent of crude oil requirement. In addition, India imported 3.9 MMT of LPG during 2018-19.

Covid crisis as such had no impact on oil imports. When the Aramco facility came under drone attack in the middle of last year even then the Saudi authorities continued their supplies to India because it was Diwali time in India. We did not reduce the intake from Saudi Arabia whereas there was a situation that because of reduction in demand we will reduce the intake. Last month we bought 7 million metric tonnes of crude.

The other aspect is that Saudi Arabia has also proposed to make investment in India. There are plans to put in $60 billion in the biggest refinery coming up in Raigad district of Maharashtra. This is trilateral cooperation between Saudi Aramco, ADNOC of UAE and Indian public sector. We look forward although there was a slowdown because of pandemic nevertheless we are committed and we look forward to greater engagement in the hydrocarbons sector.

Q: Having served in Saudi Arabia in different capacities in the past, how big is the current Covid challenge for you?

A: Of course Saudi Arabia has been a familiar place. This is my third posting here. I was Consul Haj, Consul Commercial and Consul General. I had different experiences and exposure to these types of emergency situations. In fact in the very first year here in 1997, we had a disastrous Mina fire (during Haj) 70 per cent of Mina was burnt down. That time there were no fire proof tents and we were involved in rescue operations to help the people at that point in time. During two more Haj related crises, I was the Counsel General in Jeddah.

It is a difficult time now but not something which we can't handle. Things are under our control and we hope to handle it very well. Of course definitely it is a challenging time -- one because of lockdown lot of restrictions. There are constraints imposed on you to tackle the situation. Nevertheless we are using technology to reach out and help people.

Q: What is the current status of Haj 2020 plans? Are they planning not to host foreign pilgrims this year and have only symbolic rituals with the participation of a limited number of locals?

A: The Saudi Ministry of Haj and Umra is expected to make an announcement by this month. Till such time it will be very difficult to know what kind of arrangements take place. Having said that there were instances in history when Haj had to be postponed due to situations like this. I wouldn't be surprised if measures like you are talking about are taken.

If they want to go ahead the numbers may have to be drastically reduced because congregations come from more than 200 countries around the world and it will be very difficult handling them in a pandemic situation the world is going through.

It is a very difficult choice which authorities will have to make but we will come to know soon. Of course last year we had our biggest contingent coming here with 200,000 pilgrims. People in India are of course looking forward to coming here for Haj but safety takes precedence. We are in close touch with Saudi authorities. Hopefully something will come out soon.