Anything but '65 par': How BJP got its math wrong in J'khand 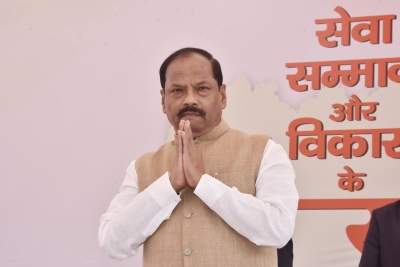 New Delhi (IANS) "Abki bar, 65 par" was BJP's clarion call for the election to the 81-member Jharkhand Assembly. But the saffron party that got 37 seats in the 2014 polls and augmented its strength to 44 will be constrained to 32 seats, according to IANS-CVoter-ABP Exit Poll. So where did the party got its math wrong?

There are a number of reasons to BJP's predicted surprise result - CM Raghubar Das's loss of credibility, and JMM chief Hemant Soren's "saffron clad" comment and tribal and OBC cocktail.

Raghubas Das, the Chief Minister, lost face and credibility. A non-tribal CM in a tribal heavy state wasn't taken well in the first place. But his lack of administrative capabilities also brought disenchantment to the fore.

Complaints started pouting in against him, from the state unit. A senior BJP leader told IANS while the election just kicked off, that "we are aware of how disenchanted even the state unit is against Das. Even (party chief) Amit Shah is aware of it. But we can't afford to change the CM face just ahead of election... that will be construed as acceptance of loss."

The last phase has been the worst performance for the BJP, if the exit poll is anything to go by. With 16 seats that went to poll on Friday, the BJP is projected to win only 2 while the JMM is slated to grab 11 and the AJSU 1.

Former Chief Minister Hemant Soren on Wednesday launched a bitter and personal attacks on leaders of the Bharatiya Janata Party (BJP). In what is seen as a direct attack on Uttar Pradesh Chief Minister Yogi Adityanath, the Jharkhand Mukti Morcha (JMM) Executive President said that saffron-clad politicians "do not marry but rape women".

Addressing a poll rally in Pakur, Soren said: "I have heard that Uttar Pradesh CM Adityanath has also been doing the rounds of Jharkhand. These are the people, BJP people, who often don't get married, but dressed in saffron, they rape duaghetrs and daughter-in-laws. Shall we vote for such people, who rape women."

It seems, people's disenchantment with the BJP only got aggravated with Soren's comment rather than it boomeranging, as BJP was hoping. Moreover, in the Santhal region, JMM patriarch Shibu Soren is still fondly remembered which seemed to have added to the JMM's advantage.

The JMM) had promised 67 per cent reservation to the ST, OBC and SC combine which appeased the tribals but also kept the OBCs happy. There are 12.08 per cent Scheduled Caste (SC) and 26.21 per cent Scheduled Tribe (ST) in the state's population, while 52 per cent are OBCs. Together, they form a formidable block that accounts for majority of the population that the JMM tapped.

JMM also promised government jobs to local people if it formed the government in the state which seem to have worked its way. Also, Raghubar Das' statement before the election that there was no plan to increase OBC quota from 14 cent to 27 per cent seems to have rubbed the 52 per cent of the state's population the wrong way.

The final result will be out on December 23 when EVMs are opened. But according to IANS-CVoter-ABP Exit Poll, BJP won't even go halfway mark of its claim of "ab ki bar, 65 par".

Previous ArticleIndia-US counterterrorism relationship has deepened: US official
Next Article CAA protest:Large-scale violence across UP has 'Bengal link'
Must Read