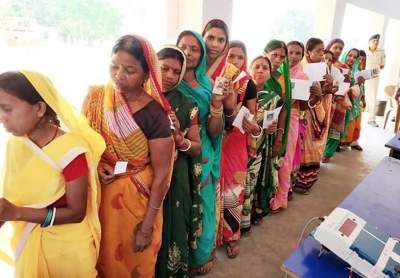 Ranchi (IANS) Political parties except the ruling Bharatiya Janata Party have demanded that the Assembly polls in the state should take place in a single phase.

The BJP delegation led by Deepak Prakash, state party vice president, demanded that the polls should be conducted in five phases and the distance between two polling booths should not be more than 2 kms.

The ruling party also sought a strict vigil on Bangladeshi intruders in the state.

"We have demanded that the Assembly polls should take place in a single phase such as is happening in a Maharashtra like big state," JMM General Secretary Supriyo Bhattacharya told IANS.

He said we have also brought to the notice of the EC team that some government officials are working as BJP agents and their social media posts are favouring the ruling party.

Congress leader Alok Dubey, who was part of his party's delegation, told IANS: "We raised the issue of misuse of district administration by the state government and demanded a single phase election".

The Communist Party of India demanded that polling should be conducted through ballot papers.

The EC team is scheduled to meet state election officials, DGP, Chief Secretary, deputy commissioners and superintendents of police of all 24 districts of the state on Friday.

The EC is likely to announce the poll dates soon.

The term of the current Assembly will end on January 5.