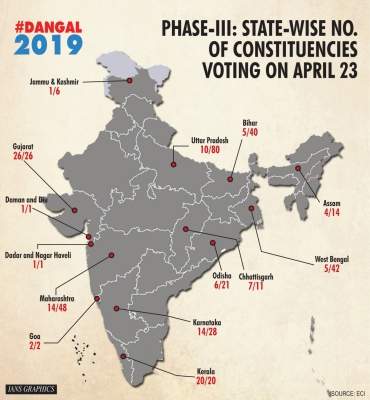 New Delhi (IANS) People in 15 states will vote on Tuesday in the third phase of Lok Sabha elections scheduled for Tuesday which will see a maximum of 117 seats going to the polls in a single phase of seven-phased election.

Voting will be completed in all seats of Gujarat, Kerala, Goa, Karnataka, Chhattisgarh, Assam, Karnataka, Kerala, Dadra and Nagar Haveli and Daman and Diu with the third phase polls.

The presidents of the two main political parties are in the fray in the third phase with BJP chief Amit Shah making his Lok Sabha election debut from Gandhinagar and Congress President Rahul Gandhi contesting from Wayanad.

The Bharatiya Janata Party (BJP) will aim to defend the 62 of the 117 third phase seats it won in 2014 and its performance in this phase will be crucial in deciding its political fortunes.

This time the BJP will be tested in its bastion Gujarat -- where polling will be held for all the 26 Lok Sabha seats -- apart from Karnataka, Chhattisgarh and Uttar Pradesh, where the party had done well in 2014.

Gujarat being the home state of Prime Minister Narendra Modi, the BJP would again look for a clean sweep in the state. However, the Congress, which gave a tough fight to the BJP in the Assembly polls held in 2017, is hoping to win 10 to 15 seats this time.

The three young Gujarat leaders -- Hardik Patel, Alpesh Thakor and Jignesh Mewani -- whose positions had helped the Congress build a narrative against the BJP during the Assembly elections, are not in the fray for the Lok Sabha polls.

Patidar agitation leader Patel, who joined the Congress last month, cannot contest due to his conviction in a rioting case, while Thakor quit the Congress earlier this month.

In Karnataka, the BJP is considered to have a strong footing in many of the 14 seats going to the polls on Tuesday. However, the saffron party faces a tough challenge from the Congress-JD-S combine.

Moreover, its vote shares too dipped in the Assembly polls held in Karnataka last year as compared to the 2014 Lok Sabha elections. In the Assembly elections, the BJP had polled lesser votes than the Congress but got more seats.

The BJP faces a strong challenge in Uttar Pradesh, as the third phase of Lok Sabha elections will be fought in the "Yadav belt".

The Samajwadi Party (SP) strongholds of Mainpuri, Badaun and Sambhal will go to the polls on Tuesday and the party's prospects have received a considerable boost following its alliance with the Bahujan Samaj Party (BSP). The Congress too is also likely to cut into BJP votes.

Pragatisheel Samajwadi Party (Lohia) President Shivpal Singh Yadav, who is contesting from Firozabad against his nephew and SP candidate Akshay Yadav, has been cautioning the people against the SP-BSP combine.

SP patriarch Mulayam Singh Yadav is contesting from Mainpuri. The joint rally held in the constituency on Friday, in which BSP supremo Mayawati, Mulayam Singh Yadav and Akhilesh Yadav shared the stage, is likely to boost the prospects of the SP candidates.

In Maharashtra, the third phase of polling will be held in some NCP strongholds, including Baramati, Madha, Kolhapur and Satara. Nationalist Congress Party (NCP) President Sharad Pawar's daughter Supriya Sule is contesting from the party's bastion in Baramati.

The Congress and the NCP have dominated the local bodies and cooperatives in the sugar belt of the state, which has of late been challenged by the BJP-Shiv Sena combine. The Lok Sabha results will show if the NCP is able to regain its earlier dominance in the region.

In Chhattisgarh, the BJP has sought to beat the anti-incumbency wave against its sitting MPs by replacing all of them. Here the saffron party faces a renewed challenge from the Congress, which returned to power in the state in 2018 after 15 years. The Congress is focusing more on local issues, telling the voters that its government has quickly delivered on its promises.

As part of the grand alliance, the Rashtriya Janata Dal (RJD) is contesting three seats, while the Congress and the Vikasheel Insaan Party (VIP) are contesting one seat each.

The key contest is in Madhepura, where sitting MP Pappu Yadav, who had won on a RJD ticket in 2014, is contesting for the Jan Adhikar Party, a political outfit floated by him in 2015. He is up against RJD candidate Sharad Yadav.

In Odisha, the third phase of elections will witness a battle between several political heavyweights as well as former bureaucrats.

In the four constituencies of lower Assam that will go to the polls on Tuesday, both the Congress and the All India United Democratic Front (AIUDF) are seeking to gain votes by targeting the BJP over its stance in support of the Citizenship (Amendment) Bill.

The AIUDF has accused the Congress of not adhering to "gentleman's agreement" between the two parties under which the regional party did not put up candidates on 11 seats and was expecting the Congress to field "weak candidates". Congress, however, has said that it had no such arrangement.

The Congress will look to swell its tally in Kerala with Rahul Gandhi in the fray from Wayanad. The party had won 8 of the 20 seats in 2014 while a few more were won by its allies. The BJP too is seeing a realistic chance to win four seats in the southern state.

In West Bengal where it faces a multi-cornered challenge from the Trinamool Congress, the BJP and the CPI-M, the Congress will seek to at least retain the three seats it won in 2014.