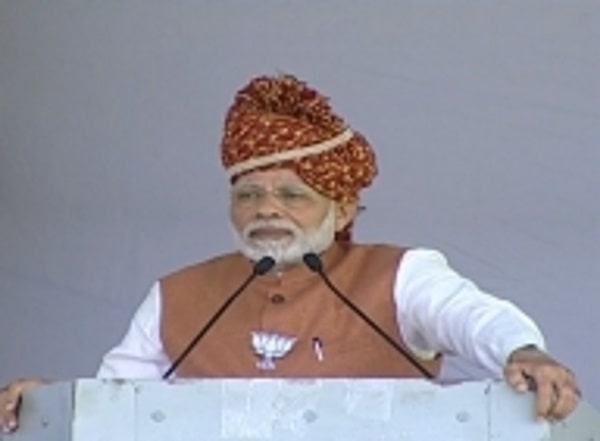 Mumbai (IANS) Prime Minister Narendra Modi on Tuesday said the government is aiming to bring 99 per cent of items below the 18 per cent GST slab and warned of stringent action against defaulters of bank loan and fugitives.

"Before GST, registered enterprises numbered 65 lakh, which has now increased by 55 lakh. Today, the GST system has been established to a large extent and we are working towards a position where 99 per cent items can be brought in the sub-18 per cent slab," said Modi.

In a stern warning, he said economic fugitives and defaulters of bank loans would not be spared, and referred to the Insolvency and Bankruptcy Code, 2016 (IBC), the Fugitive Economic Offenders Act, 2018 and other changes that were helping prosecute those who earlier escaped the law.

"Who would have thought four years ago that the main suspect of the (AgustaWestland)helicopter scam, Christian Michel, would be brought to India?

"Earlier, when companies used to be unable to repay loans, nothing used to happen... they had a 'suraksha kavach' (protective shield) from the 'khaas parivar' (privileged family)... This has ended with the IBC," Modi asserted in his address to the "Republic TV's" Surging India Economic Summit here.

Modi also highlighted in detail India's achievements in the past nearly five years and said the nation has taken the first steps towards joining the $5 trillion economy club.

He discussed the strides made in the economy across major sectors, ranging from waterways to aviation, in its path to development that catapulted India to compete at the global level.

"Surging India - the two words are the expression of 130 crore Indians. These are the feelings, vibrations which the world is witnessing. In the global society, India's growth is moving ahead in a very fast manner. India's image before the world is getting better with each passing day," he said.

"Four years ago, did anyone think that within no time India will take its step forward to join the Five Trillion Dollar Economies Club, or that in the Ease of Doing Business rankings the country would move from 142 to 77th position?

"India is taking rapid actions to come in the Top 50," Modi said.

He said that nobody could have thought that people who travel in air-conditioned trains will soon travel in helicopters. India's aviation sector has soared to such heights that there is need to order 1,000 new choppers.

In this context, Modi pointed out that since Independence, the country had only 450 helicopters in the public and private sectors.

He added that autodrivers, vegetable vendors and tea-sellers now use the BHIM App and keep debit cards in their pockets. The country has already tested a Made In India engine-less train running at 180 kmph, while the National Waterways has become a reality with a ship sailing from Bengal on River Ganga to Varanasi.

"Did anyone think that India will launch 100 satellites at one go, and was moving ahead with the Gaganyaan Mission," Modi asked.

The Gaganyaan Mission of the Indian Space Research Organisation (ISRO) is intended to take an Indian astronaut into space by 2022.

Previous ArticleToll rises to 8 in Mumbai hospital blaze, 25 critical
Next Article 5 killed by elephants in Jharkhand
Must Read