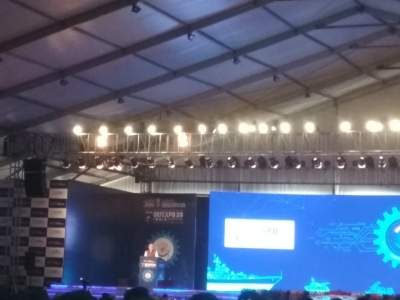 Lucknow (IANS) With an aim strengthen India's position in the world, especially in the defence manufacturing sector, Prime Minister Narendra Modi on Wednesday said that the government expects to do arms and ammunition export business of Rs 35,000 crore in next five years.

In his address at the inaugural ceremony of the DefExpo2020, in which representatives of 40 countries are participating, Modi said: "There are unlimited possibilities in defence manufacturing in India. There is talent and there is also technology, there is innovation and there is also infrastructure, there is favourable policy and there is also protection of foreign investment. Here is Demand, Democracy and also Decisiveness."

He also said that it is also India's responsibility to provide security to friendly countries apart from providing humanitarian relief during crisis.

About the exhibition, he said: "This Expo is India biggest exhibition. This Expo has registered itself among world top 100 Expos.

"In order to give further impetus to defence manufacturing in India, new targets have been set. Our goal is to bring the number of MSMEs in the field of defense production beyond 15,000 in the next five years," he said.

Modi said that Uttar Pradesh is among the largest states in the country and in the coming times, it is also going to be one of the largest hubs of defence manufacturing in the country. "In such a situation, this first defense expo of the new decade will be here. It is a matter of happiness in itself," he said.

This time, over a 1,000 defence manufacturers and 150 companies from all over the world are part in the Defexpo. Apart from this, Defence Ministers of more than 30 countries and business leaders are also present.

The Prime Minister said that Make in India will increase India's security at the same time, new employment opportunities will also be created in the defence sector.

"Wherever the 21st century is discussed, attention will be naturally drawn towards India. Today's Defence Expo is the vastness of India, its prevalence, its diversity," he said, adding that those who are aware of subjects like defence and economy surely know that India is not just a market but has an immense opportunity for the whole world.

"Technology can be misused through terrorism or cyber threat. These are a big challenges for the whole world. In view of the new challenges, all the defence forces of the world are developing new technology. India is not untouched by this," he said.

Noting that earlier 217 defence licenses were given, Modi said that in last four years, 460 defence licenses have been given. "Be it artillery guns, aircraft carrier, frigates, submarines, Light Combat Aircraft, combat helicopters, many such accessories are being made in India today," he said.

The Prime Minister also said that earlier defence export was to the tune of Rs 2,000 crore but in last two years it has risen to Rs 17,000 crore. "After 2014, policy reforms were done and it can been seen that the defence sector is reaping the benefit," he said.

Earlier in defence manufacturing, the private sector faced many problems of testing infrastructure, but now "avenues have been opened for this and DRDO has made a policy of Transfer of Technology without charge for Indian industries".

Modi said that such steps will increase the participation of Indian industries in the world supply chains and world's top defence manufacturers will get more competitive Indian partners.

"With the formation of the Chief of Defence Staff and the Department of Military Affairs, the process of demand and manufacturing is going to get easier. It will definitely benefit industries associated with the defence sectors and the investors wishing to invest in this sector," he said.

The Prime Minister said that the Indo-Russian Rifles Private Ltd in Korba, Amethi is a best example of collaboration in defence sector.

As many as 200 new defence start-ups are expected in next five years, said Modi adding that there are efforts to develop at least 50 new technologies and products.

He also said that India's presence in the outer space is already strong and is going to get stronger in the coming years. "India's space technology is playing an important role in 130 crore Indians from governance to security.

"I am proud India has developed indigenous technology. Today ISRO is exploring outer space for India and for the world and the DRDO of India is looking after the ways to protect these assets from falling into hands of the wrong forces," he said, adding India's presence in space would be both for welfare and warfare.

Previous ArticleDifferent outfits jointly carrying out attacks: Dilbagh Singh
Next Article Over 5,000 under surveillance for coronavirus: Centre
Must Read