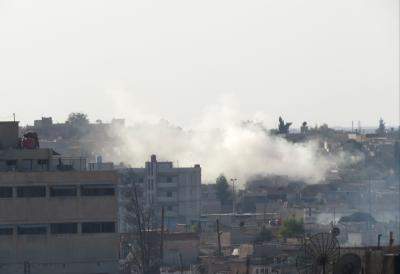 Damascus/Ankara (IANS) At least 130,000 people have been displaced as Turkey has intensified its offensive against the Kurdish militias in northern Syria, the UN said in a statement on Sunday.

The UN Office for the Coordination of Humanitarian Affairs (UNOCHA) said some of the internally displaced had found shelter with relatives in other locations but that others had travelled to collective shelters in cities further south like Tal Amr, Hasakah and Raqqa, once the de-facto capital of the Islamic State (IS) terror organization's territory, reports Efe news.

It added that as many as 400,000 people could require humanitarian assistance and protection in the coming days and warned that hospitals in Ras al-Ayn and Tal Abyad had been closed since Friday.

In addition, a water shortage has affected roughly 82,000 residents of two refugee camps in the region, including al-Hol, which houses many former IS fighters and their families.

The Turkish Army, meanwhile, boosted its operation against the People's Protection Units (YPG), a Kurdish militia that led the ground offensive against the IS with the backing of the US.

Turkish media reported on Sunday that 'Operation Peace Spring', as it has been dubbed by Ankara, intensified particularly around the strategic border city of Ras al-Ayn.

A new convoy of tanks and heavy artillery was also sent to Akcakale, which sits opposite Tal Abyad on the Turkish side of the border.

In response, the YPG fired around 300 projectiles into Turkish territory, killing 17 civilians.

Four Turkish soldiers have died so far in the operation, which began on Wednesday.

The number of casualities within the YPG and the Syrian National Army (formerly the Free Syrian Army), the new name under which Syrian militias allied with Ankara are fighting, is less clear.

Their have been several civilian deaths on both sides of the border.

A number of Turkey's NATO allies have criticized the operation, as have members of the Arab League, which has described it as an "invasion" of a sovereign Arab nation.

France and Germany announced on Saturday that they would suspend arms sales to Turkey.

Turkey said it had taken Ras al-Ayn on Saturday but the Syrian Democratic Forces, an umbrella militia dominated by the YPG, denied it.

The Syrian Observatory for Human Rights, a UK-based war monitor, on Sunday said the SDF had retaken the city from Turkish forces and theSyrian National Army.

Turkey aims to carve out a so-called "safe zone" that will extend about 32 km into northern Syria, stretching from the Euphrates River to the Iraqi border.

That zone is intended for the resettlement of some two million Syrian refugees who took refuge in Turkey from their nation's eight-year civil war.

It will also serve as a buffer between the YPG militias in Syria and members of the Kurdistan Workers' Party (PKK), which has mounted a smoldering insurrection against the state in mainly Kurdish southeastern Turkey for more than 30 years.

The YPG is the largest Kurdish militia in the region and was Washington's key ally in the fight against the IS.