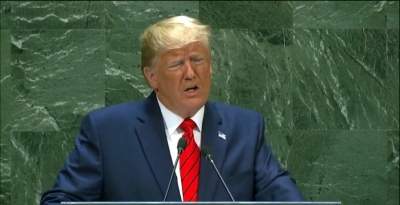 New York (IANS) India and the US are very close to concluding a trade deal, and a larger deal is set to be finalised in some time, US President Donald Trump said on Tuesday, as teams from both sides were engaged in negotiating a limited trade package.

Answering queries from reporters ahead of a bilateral meeting with Prime Minister Narendra Modi, Trump, asked if a trade deal was in the offing, said: "Well, I think very soon.

"We're doing very well. And Bob Lighthizer (United States Trade Representative) who's right here, was negotiating with India and their very capable representatives. And I think very soon we'll have a trade deal.

"We'll have the larger deal down the road a little bit, but we will have a trade deal very soon," he said.

His statement comes as India's Commerce Minister Piyush Goyal was in New York City to hold talks with Lighthizer and team on Tuesday.

Earlier, Trump said that he and Modi "have many things to discuss. One of them, and perhaps in our case, one of the biggest ones is trade. We do a lot of trade together and we're working on that."

PM Modi, in his remarks, said that "As far as trade is concerned, I'm very happy that the day before yesterday, in Houston, in my presence there was an agreement signed by the Indian company, Petronet, for an amount of $2.5 billion, which is the amount of investment that the Indian company is going to do in the energy sector.

"And this will mean that in the years to come, in the decades to come, this will result in trade of an amount of $60 billion and create 50,000 jobs, which I think is a very big initiative taken by India."

Trump's presence at the Howdy Modi event in Houston, the hub of the US' oil and gas sector, on Sunday was significant. On Saturday, India's Petronet inked a deal with US liquefied natural gas (LNG) developer Tellurian Inc for up to five million tonnes of LNG through equity investment in Driftwood Holdings, a subsidiary located in Louisiana.

The agreement was inked on the sidelines of a meeting between Prime Minister Modi with oil sector CEOs in Houston. According to the MoU, Petronet will make an investment to purchase an interest in Driftwood Holdings that will give Petronet the right to purchase up to 5 million tonnes per annum of LNG from Phase I or Phase II of the project.

To a question on ironing out the trade issues, MEA spokesperson Raveesh Kumar said on Monday night: "When President Trump and PM Modi met last they had a broad understanding that the issues on trade must be resolved quickly, and those discussions are ongoing."

Trump has complained of high tariffs imposed by India on US products, including a 50 per cent tariff on Harley-Davidson motorcycles.

Addressing the Howdy Modi on Sunday, Trump had said that both sides are working to make their nations "even more prosperous than ever before".

"The economic miracles are taking place. Indian companies are supplying tens of thousands of jobs across a range of industries. In 2018 JSW Steel announced it would invest $500 million to revitalize a shuttered steel plant."

"We welcome India's role in investment in our lone star state," he said, referring to Texas.

Referring to Indian investment in the US, he said: "India has never invested in the US like it is doing today. And I want to say it's reciprocal, because we are doing the same thing in India."

Trump said the US is working to expand American exports to India, one of the fastest growing markets.

"We are committed to ensuring that Indian people have access to the finest goods in the world, products stamped with Made in USA."

On oil and gas exports to India, he said that crude exports have grown by 400 percent and LNG continues to "soar at record numbers".

Previous ArticleModi receives Global Goalkeeper Award, dedicates it to 1.3 bn Indians
Next Article MiG 21 crashes near Gwalior in MP, no casualties
Must Read