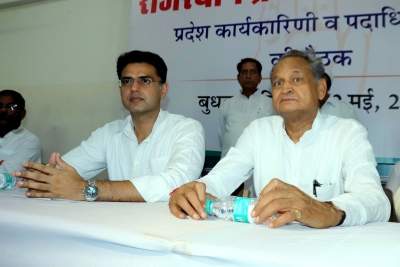 Jaipur (IANS) Bhilwara has become a global role model by breaking the corona chain with efforts made by the state government which include screening of 5 crore people and testing lakhs of households still date, said Chief Minister Ashok Gehlot.

He added that the first case in Rajasthan was reported on March 2, 2020 and strict measures were taken in the state on the very first day. "We sealed the borders the day we found a doctor being corona positive in Bhilwara and it is becoming a learning ground now. 22 lakhs families from villages, nearly 10 lakh households in the city were tested and hence Bhilwara set an example against corona in India," said Gehlot.

The city has now recorded 17 recoveries with 11 discharged out of the 27 patients who reported positive. "We are working on a war-footing in a 6-part process beginning with the imposition of curfew, coordination work of police surveying colonies where the visitors at Bangar Hospital, where it all began, might be staying," said Harendra Mahawar, SP, Bhilwara.

In India, a few hotspots of COVID-19 were listed as the epicentres of coronavirus out of which Bhilwara emerged in the list of 10 major spots. With 27 cases, the district was considered the worst hit in Rajasthan and for a few days, at the national level too.

Mahawar added that more than 5,000 people were listed who consulted the COVID-19 positive doctor of Bangar Hospital. Patients of IPD and OPD were also screened.

To break the chain of contamination, nearly 6,000 people were identified and put under isolation in only 2 days. Patients from almost 19 districts and 4 states were in the hospital when a sudden rise of positive patients was reported. Every single individual was put in strict isolation and a curfew was imposed within 15 minutes without affecting the supply of food & other essentials. CLG members, community leaders, and religious gurus were asked to motivate the public to stay home.

The Rajasthan CM said that things were controlled with the imposition of curfew and today, 34 places are under curfew in Rajasthan.

"Two km area of a person found COVID-19 positive is sealed and checks are done. Today, out of total number of positives in Rajasthan, nearly 30-32 are the evacuees from Iran at Jaisalmer & Jodhpur. People with travel history or any contact with positive patients are being isolated and checked. The only worry is of people who are coming out positive and have no history of either travel or contact," Gehlot added.

"Officials of the Central government are in touch with Chief Secretary DB Gupta and they mention Bhilwara in their video conferencing," he said

Chief Medical & Health Officer Dr Mushtaq Khan said, "We worked parallel on precaution and treatment. The main task was to identify the relatives of the first patient and isolate them. It was done on a war-footing and everything got under control at the right time."

Rajendra Bhatt, District Magistrate, Bhilwara said, "We have deployed corona fighters in villages who are led by the corona captain, the SDM. They submit daily reports on the screenings in rural areas and if there is any sign of community spread."

"We have extended a total shutdown for a few more days and people will get everything they need at their doorstep. No shop, dairy, medical store will be open. People can directly call us for medicine, food or anything. For this, at least 4-5 control rooms of several departments are being operated," he added.

The administration has acquired 42 hospitals with dedicated beds for positive patients, 1551 bed quarantine facilities prepared at hotels and other such establishments. Also, places have been identified where an infrastructure of 10,000-15,000 beds can be developed. The officials have also deployed 3-tier security for the healthcare officials.

25-30 lakh screenings have been done in the past few days and daily reports are being sent to the District Magistrate and Superintendent of Police.

For 3 days now, the city has reported only 1 positive case who had a history of visiting the corona affected hospital. The district now has only 7 COVID-19 patients as reports of 17 were negative and two died due to other illnesses.

"The population of the city has been screened at least 3 times now and people having normal cough & cold due to weather change were also checked and surveyed. Those having symptoms were put under isolation or quarantine. People also cooperated. There was a time when Rajasthan had 18 patients and 12 were from Bhilwara," said Bhatt.