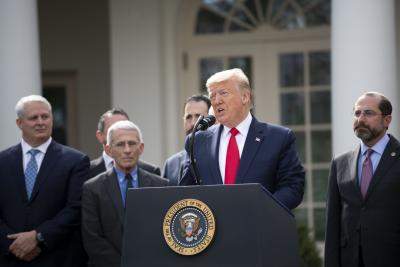 New York (IANS) US President Donald Trump has signed the largest economic stimulus package in history worth about $2 trillion to rescue the nation from the clutches of the coronavirus pandemic after Congress in a rare show of unity passed it.

The relief package was enacted on Friday as the US recorded 103,942 coronavirus cases during a week in which 3.3 million people officially registered as unemployed.

The highlight of the package, which amounts to almost 10 per cent of the US GDP, is an outright payment of $1,200 each to almost all adults in the country and $500 each to most children to help them tide over the crisis.

After months of confrontation and invectives capped by Trump's impeachment, the two parties came together to approve the recovery package by voice vote on Friday in the House of Representatives and unanimously in the Senate on Wednesday.

But the hostility lingered as Trump did not invite Democratic Party leaders who had worked hard to get it through Congress to the signing ceremony, even though he said: "I want to thank Republicans and Democrats for coming together, setting aside their differences, and putting America first."

Later at a news briefing, he said he expected another emergency relief package for the nation's economy crushed by closing of businesses as a preventive measure against the spread of the coronavirus and the rising medical costs.

The relief package includes aid for businesses, allocation for medical efforts against the coronavirus, food assistance, extended unemployment benefits and help for states and local governments.

It was passed by a voice vote in the House as many of the 435 representatives could not be present because they were stuck in their constituencies either due to self-quarantine or cancellation of flights.

During the Friday session, the House mirrored the coronavirus prevention measures across the nation: Representatives maintained social distances and disinfected microphones and some wore latex gloves.

The Senate had earlier passed the legislation for the package after more than a week of haggling between the White House and the Democrats.

Democrat House Speaker Nancy Pelosi thanked Republican Senate leader Mitch McConnell, with whom she has been at odds on various issues, for cooperating on the relief package.

"We are all a family, and like many families, we have our differences, but we also know what is important to us."

High drama preceded the passage of the relief package legislation, even as the nation beaten down economically by the movement restrictions waited for help.

While the initial blockage came from Democrats, who wanted to ensure that the assistance given to corporations was not used to buoy their stock prices or for management bonuses, and wanted to increase benefits to workers, the final hurdle came unexpectedly from four Republican Senators opposing the extension of unemployment benefits.

Forceful action by Trump and the party leadership made them back down.

In the House, a lone Republican representative, Thomas Massie, threatened to block the voting using procedural tactics. Trump came down hard on him, calling for his expulsion from the party.

In a tweet, Trump even agreed with Democratic Party leader John Kerry who had used an unprintable epithet to describe what he said was the representative's malaise of stupidity that needed quarantining.