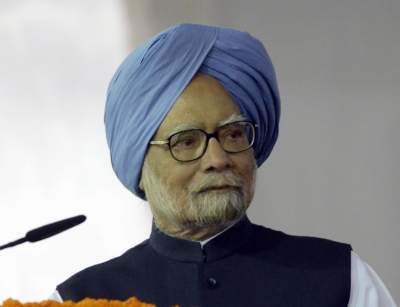 New Delhi (IANS) In a veiled attack on former Prime Minister Manmohan Singh for his comments that 'Bharat Mata ki jai' and nationalism are being misused to construct a militant and emotional idea of India, Prime Minister Narendra Modi on Tuesday said that few political parties are putting their interest above the country.

Prime Minister made this remark during the Parliamentary party meeting on Tuesday, which was attended by all the ministers and parliamentarians of the BJP.

The meeting lasted for about 45 minutes and the Prime Minister spoke for 15 minutes.

Speaking to the media after the meeting, Parliamentary Affairs Minister Pralhad Joshi said, "A meeting was held under the leadership of Modiji. The Prime Minister said that we are here for the benefit of the country. Modiji said that country's interest is supreme and development is our mantra," adding that for development there should be "peace, unity and goodwill".

According to Joshi, Modi said in the meeting that even during the freedom sgtruggle some people desisted from raising slogans like 'Vande Mataram'.

Joshi also said that some elements which are opposed to the growing stature of India have become stronger recently.

The remarks of the Prime Minister came almost 10 days after Manmohan Singh during a book release function in the national capital hailed the role of first Prime Minister Jawaharlal Nehru in shaping India as a modern nation state and said that "nationalism" and the slogan of 'Bharat Mata Ki Jai' are being misused to construct a militant and purely emotional idea of India.