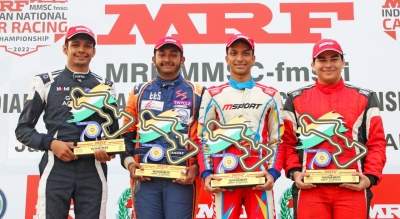 Chennai (IANS) Four races and four winners -- that was the outcome in the premier Formula 2000 category while Coimbatore ace Arjun Narendran bagged a double in the Indian Touring Cars class as the third and penultimate round of the MMSC fmsci Indian National Car Racing Championship 2022 concluded at the Madras International Circuit here on Sunday.

The competition in the MRF F2000 category was fierce with Sohil Shah (Bengaluru), Dillon Thomas Zachariah (Chennai), Sai Sanjay (Salem) and Mohammed Ryan (Chennai) each winning a race over the weekend.

If Sohil Shah had won the first race on Saturday quite comfortably, Dillon, Sai Sanjay and Mohammed Ryan had to earn their victories on Sunday. Dillon shrugged off an otherwise disappointing weekend, to notch his maiden win of the season while Ryan held off Sohil Shah in the next outing. It was then Sai Sanjay's turn to edge out Sohil Shah in the fourth race to safeguard his top position in the championship standings.

Arjun Narendran (Arka Motorsports), winner of Race-1 on Saturday, swept to another fine win starting from P5 on the reverse grid in the Indian Touring Cars category. Championship leader Arjun Balu (Race Concepts) from Coimbatore, who moved up after starting P8, limped behind him for second place with his car suffering from loss of power, while Hyderabad's Jeet Jabakh (Rayo Racing) finished a distant third in the 12-lap race interrupted by a Safety Car period.

In the Indian Junior Touring Cars category, Akkineni Anand Prasad led a podium sweep for Performance Racing with Raja Rajan and Srinivas Teja coming in second and third, respectively. Another Performance Racing driver, Ritesh Rai, also from Chennai, topped the Super Stock category to complete a double for the weekend.

Earlier, the experienced Raghul Rangasamy (MSport) survived tough competition to notch his third win in the Formula LGB 1300 category after starting from P8 on the reverse grid. Raghul received close attention from Viswas Vijayaraj (Nellore, DTS Racing) before the latter skidded off the track at the last corner when the pair was going wheel-to-wheel.

Chandigarh's Angad Mathroo notched his second win of the season in the MRF Saloon Cars (Toyota Etios) category. The victory brought him within 10 points of championship leader Justin Singh (Gurugram) who finished second ahead of Jai Prashanth Venkat (Coimbatore).

The fourth and concluding round will be held at the same venue on the weekend of January 27-29.

US postpones Blinken's China trip over spy balloon
Follow Us