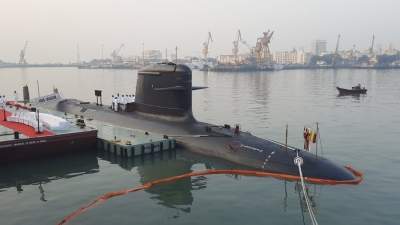 Mumbai (IANS) The fifth submarine in the Kalvari Class, INS Vagir, built by the Mazagaon Dock Shipbuilders Ltd., was commissioned into the Indian Navy here on Monday in the presence of Chief of Naval Staff, Admiral R. Hari Kumar, a defence official said.

Adding to the Navy's fighting prowess, the INS Vagir -- literally meaning a sand shark symbolising stealth and fearlessness -- has been indigenously built with technology transfer from France.

Officials said it will further boost the Navy's capabilities to further Indian maritime interests in deterring enemies, for Intelligence, Surveillance and Reconnaissance to provide a decisive blow in times of crisis.

INS Vagir -- the third submarine to be commissioned into the Indian Navy in two years -- comes with a sophisticated weapons package, the best of the sensors in the world, mine-laying, wire-guided torpedoes, sub-surface to surface missiles capable of neutralising a large enemy fleet.

It can also launch marine commandos for special ops, has a state-of-the-art torpedo decoy system and its powerful diesel engines can quickly charge batteries for stealth missions, said the officials.

INS Vagir comes with a glorious legacy with a submarine of the same name commissioned in November 1973 which was decommissioned in January 2001 after three decades of valorous service to the nation.