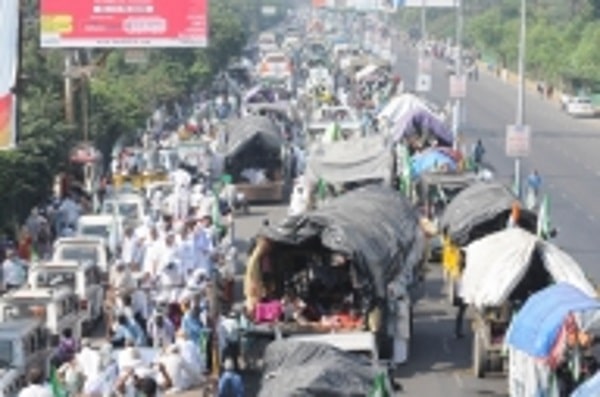 New Delhi (IANS) Thousands of farmers on Wednesday ended their 10-day Kisan Kranti Yatra after arriving at Kisan Ghat in the national capital.

The Central government allowed them to enter Delhi in the early hours of Wednesday, ending the prolonged standoff between the police personnel and protesting farmers.

Led by Bharatiya Kisan Union (BKU) chief Naresh Tikait, over 400 tractors carrying thousands of farmers reached Kisan Ghat. Tikait declared it as the "victory of farmers" and said the Bharatiya Janata Party (BJP) government has failed in its "motives".

"The farmers remained unfazed despite all the hardships. We have been marching for 12 days now, farmers are tired as well. We will continue to demand our rights but for now we are ending the march," Tikait told IANS at Kisan Ghat.

Shouting anti-BJP slogans, the farmers, with blisters on feet, reached Kisan Ghat at around 2 a.m. on Wednesday.

The farmers said they have reached an agreement with the Central government, which, according to them, has accepted "most of the demands".

They said that their prime demand of increasing the price of crops has been agreed upon by the government.

"A formal announcement in this regard will be made within six days by the government," Rakesh Tikait, national spokesperson of Bharatiya Kisan Union (BKU), told IANS, shortly before the farmers called off their march.

The government has also assured the farmers of bearing the costs for the repair of tractors that were damaged during the standoff with the police personnel at Uttar Pradesh-Delhi border earlier on Tuesday.

They also hailed former Prime Minister Chaudhary Charan Singh -- widely regarded as a hero of the country's peasants, and applauded the coming together of farmers.

The top leadership of the protesting farmers later addressed the gathering and said that they should be united in their future struggles too.

At around 5.30 a.m. on Wednesday morning, the farmers began dispersing from the Kisan Ghat.

Amid massive deployment of security personnel at Uttar Pradesh-Delhi border, the farmers reinforced their march to the national capital after obtaining necessary permissions from the administration.

Earlier on Tuesday, as the farmers tried to enter Delhi, police stopped them on the Delhi-Uttar Pradesh border, triggering violence that left some of them injured.

The farmers have a charter of 15 demands including loan waiver and fair prices for crops, which they want to be implemented without delay.

Their demands include complete loan waiver, revoking ban on 10-year-old tractors in the National Capital Region (NCR), reduction in electricity tariff, implementation of the recommendations of the M.S. Swaminathan Commission on remunerative prices and payment of sugarcane arrears among others.

The protesters started their 10-day march from Haridwar in Uttarakhand led by the BKU and on Tuesday, they reached the Uttar Pradesh-Delhi border. There was a heavy deployment of security forces at the border.