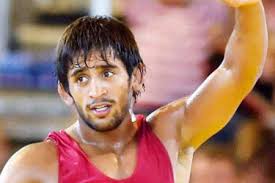 It was Bajrang's second successive gold medal at the Asian Games after his triumph in Incheon 2014 in the 61kg category.

The final witnessed a tough battle as the Japanese gave a good fight after struggling in the initial stages.

Bajrang had raced away to a 6-0 lead within the first couple of minutes before Daichi fought back to take four consecutive points going into the break.

The second round saw a tough, see-saw battle. Daichi equalised at 6-6 shortly after the restart. Both wrestlers fought tooth and nail in the final two minutes before the Indian emerged a deserving winner.

Bajrang struggled in the early stages as Khasanov opened up a comfortable 3-0 lead. But the Indian staged a strong comeback by notching up six consecutive points to lead 6-3 at he break.

Bajrang completely dominated the second and final round, scoring seven points within two minutes to take a 13-3 lead which saw him being adjudged the winner due to technical superiority.

A wrestler is considered winner by technical superiority when he leads by 10 or more points.

Bajrang thrashed Fayziev Abdulqosim of Tajikistan by technical superiority in the quarter-finals. He had opened up a formidable 9-2 lead in the first round. The Haryana grappler took three points in the opening 30 seconds of the second round to take a decisive 12-2 lead.

Bajrang registered another technical superiority verdict, this time by 10-0 against Batmagnai Batchuluun of Mongolia in the semi-finals.