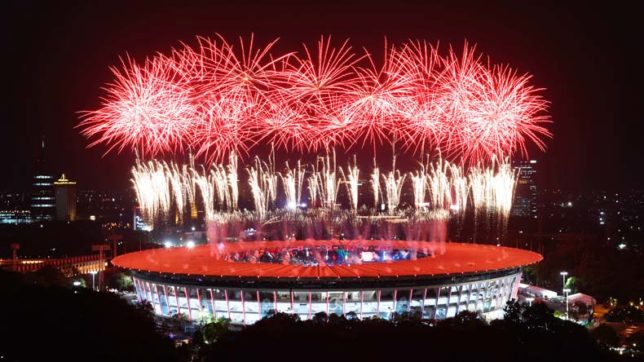 Fireworks going off during the inauguration of 18th Asian games

Jakarta, Aug 18 (IANS) The 18th Asian Games opened amid a spectacular ceremony at the Gelora Bung Karno Main Stadium in this Indonesian capital on Saturday night.

Javelin thrower Neeraj Chopra was India's flag bearer in the opening ceremony, with 568 athletes marching behind him.

Chinese President Xi Jinping's special envoy and Vice Premier Sun Chunlan attended the ceremony, standing up from her seat and waving to the Chinese delegation as the Asian sports powerhouse was led into the stadium by Rio Olympics taekwondo gold medallist and flagbearer Zhao Shuai in the athletes parade.

China sent a relatively young delegation, with 631 out of their 845-athlete squad participating in neither the Olympics nor the Asian Games.

"The Asian Games can serve as a mid-term exam for us in the build-up to the Tokyo Olympics," Chinese delegation general secretary Liu Guoyong said prior to the opening ceremony. "The Games could let them have a feel for major international sporting events."

To highlight the athletes parade, the North and South Koreas marched together under a unified Korean flag, just like that during the PyeongChang Winter Olympics in February. They will also field joint teams in women's basketball, rowing and canoeing events.

The athletes' parade was followed by a stellar art performance, which was full of Indonesia's diverse cultures, history, legendary folklore and traditional dance with an immense volcanic mountainscape as the storytelling canvas.

The cauldron for the Asian Games was lit by Indonesia's first ever Olympic gold medallist, famous shuttler Susi Susanti.

China will try to become runaway leaders again in Jakarta after they have led the medals table in the past nine editions. They will be competing in 376 medal events in 38 sports.

The Jakarta Asiad will stage 465 events out of 40 sports, among which 330 events from 32 sports will feature in the 2020 Tokyo Olympics. The Games will also showcase climbing and skateboarding, the two sports being added to the schedule of the Tokyo Olympics. The Indonesian martial art of pencak silat will be among 10 events making their Asian Games debut.

Jakarta has had less than the normal amount of time to prepare for the Games. It was selected only four years ago after Vietnam, the original host, pulled out due to financial setbacks.

The Asian Games, attracting more than 10,000 athletes, will run through Sept. 2. Jakarta will be the main venue while several sports will take place in Palembang, the capital city of South Sumatra Province.

It's the second time for Jakarta to host the Asiad, which had its fourth edition in the Indonesian capital in 1962. The inaugural Asian Games were held in New Delhi, India in 1951.