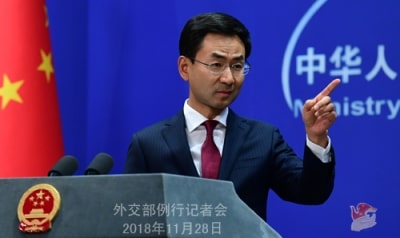 Beijing (IANS) China on Friday indicated it would continue to block India's bid to declare Masood Azhar as an international terrorist whose outfit Jaish-e-Mohammad (JeM) has claimed to plot the worst-ever attack in Jammu and Kashmir that killed 45 CRPF troopers.

China has repeatedly blocked India's bid to ban Azhar at the UN, citing lack of evidence against the man who was the mastermind behind the Mumbai terror attack and has plotted dastardly attacks on Indian Army camps.

To India's renewed appeal to the international community, including China, to designate Azhar as an international terrorist in the aftermath of Thursday's attack, Beijing indicated it won't budge from its position.

"We are deeply shocked by this attack. We offer our condolences and sympathies to the injured and families of the bereaved. We firmly oppose and strongly condemn all forms of terrorism," Foreign Ministry spokesperson Geng Shuang said here.

"We hope all relevant regional countries will cooperate to cope with the threat of terrorism and jointly uphold regional peace and stability."

Asked if China will rethink its decision on Azhar, Geng said: "As to the issue of the listing, I can tell you that 1267 Committee of the Security Council has clear stipulations on the listing and the procedure of terrorist organisation and individuals and the JeM, which has taken the responsibility of the attack, has been included on the Security Council counter-terrorism list.

"As to the listing of the individual, we have always dealt with the issue in an earnest, professional and responsible manner."

Geng said Beijing will remain in touch with India to ban Azhar at the UN but will handle the issue in a "constructive and responsible manner".

India had to free the dreaded terrorist in exchange for the release of the passengers of the hijacked Indian Airlines flight IC-814 in 1999.

China is a veto-wielding member at the 1267 panel of the Security Council which deals in designating outfits and individuals.

Beijing has repeatedly blocked India's proposal to ban Azhar at the UN. In 2016, it cited lack of evidence against the man. In 2017, the proposal by the US and France met the same fate as Beijing again vetoed their resolution.

This has become one of the sticking points between New Delhi and Beijing.

China has always defended its ally Pakistan on the front of terror and heaped praised on it in its fight against the menace. Beijing has also made huge investments in Pakistan as part of its ambitious Belt and Road Initiative.