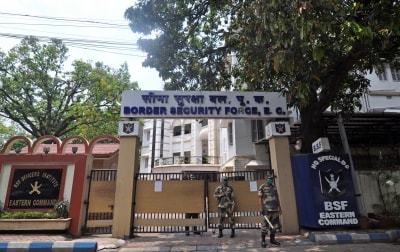 New Delhi (IANS) Two floors of the Border Security Force (BSF) Headquarters were closed on Monday after a Head Constable working there was found COVID-19 positive on Sunday.

The BSF Headquarters is a few hundred metres far from the Central Reserve Police Force (CRPF) Headquarters, which was sealed on Sunday after a bus driver deputed there was found COVID-19 positive.

The offices on the first and second floors of the BSF Headquarter situated at Block 10 of the CGO Complex in south Delhi's Lodhi Road area were closed as a precaution, BSF Spokesperson Subhendu Bhardwaj told IANS.

"As the Head Constable was working in an office on 2nd floor of the BSF force Headquarter, all persons came in his contact have been identified and quarantined. They will also be tested for COVID-19," Bhardwaj said.

Prior to the detection of the case, the BSF Headquarter was closed early by 4 p.m. on May 1 as a special precautionary measure.

"All attending staff vacated offices and the entire office complex was thoroughly sanitized with prescribed solutions of disinfectants. The Headquarter was closed on May 2 and May 3."

No staff other than the security personnel and the control room members in limited numbers worked in the Headquarter, he clarified.

The official said that the disinfection of the complete Headquarter will be done again in the afternoon on Monday in the backdrop of the latest COVID-19 positive case.

"Identification of secondary and tertiary contacts as per protocol is being carried out. All protocols are being followed."

With the fresh COVID-19 positive case found in the BSF, it takes the number of infected personnel in the force across the country to 55. Of them, 41 are in Delhi and 14 in Tripura.