No laxity will be tolerated in execution of dream project schemes, CM warns officials 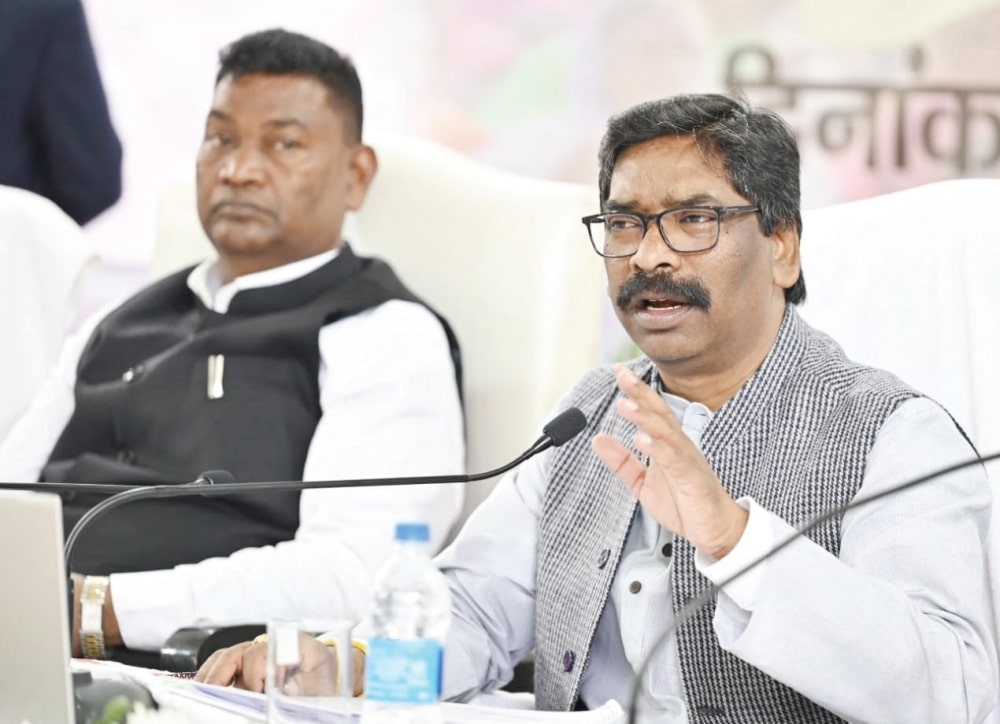 Lohardaga: Chief Minister Hemant Soren warned the officials that he will not tolerate any negligence in the execution of dream projects and schemes of the state government. Chairing a high-level review meeting over the execution of schemes in Lohardaga and Gumla districts he said that Sarvajan Pension Yojana, Savitribai Phule Kishori Samriddhi Yojana, Chief Minister Employment Generation Scheme, Chief Minister Livestock Development Scheme, KCC, Drought Relief Scheme and MNREGA are the dream projects of the government.

He said that the objective of these schemes is to strengthen the rural economy and make the villagers self-reliant therefore in such a situation no laxity and negligence will be tolerated in the implementation of these schemes. There is a need to work with full speed and strength in the direction of connecting more and more beneficiaries with all these schemes he said. The Chief Minister inquired from the officials of both districts about the status of the applications received under all these schemes and their execution.

He said that the situation in both districts is not satisfactory in the matter of implementation of the schemes of the government. The speed of connecting the beneficiaries with the schemes is very slow while these schemes are included in the special priorities of the government. In such a situation whatever pending applications have been received regarding these schemes verify them as soon as possible, so that the beneficiaries can get their rights.

The needy who have been deprived of these schemes so far, should also work to give them the benefits of the schemes by running a campaign in mission mode. He told the officers that they are answerable to the public in this case they should act cautiously. He said that government has no intention of taking any kind of action against the officials and they have full freedom to work in his government but they should discharge their responsibilities without any fear and intimidation and live up to the expectations of the general public.

He said that the schemes and works of the government would be fully monitored. Till now the schemes were reviewed at the headquarters level but his government is working to see the ground reality of the schemes at the district level. If needed, the plans will be reviewed in detail at the block and panchayat level as well he said. The Chief Minister said that if the villagers are migrating for employment boys and girls are becoming victims of human trafficking so somewhere the reason for this is not being able to motivate the villagers and labourers.

Due to these reasons, they are not getting the benefit of the schemes of the government. That the government is running many schemes for employment generation at the local level therefore the officials should work to connect the villagers with these schemes so that they can get work in their own homes.

The Chief Minister said that if there is any problem in the implementation of the schemes or if there is any doubt then immediately contact the departmental secretary so that its solution can be found and people can be benefitted. The Chief Minister said that many complaints are being received from these two districts regarding illegal mining. In this case action should be taken by registering an FIR against the illegal miners.

On this occasion, the Chief Minister inquired about the action taken by the police regarding Maoists and crime control. He said that the investigation and execution of the cases should be done fast. If crime increases somewhere action will also be taken against the officers of the police station concerned.

Previous ArticleRamgarh’s Congress MLA Mamta Devi awarded five years of punishment in Gola firing case, to lose membership of house
Next Article Workshop organized for purpose of preparation of rules in the perspective of Jharkhand state under 'PESA Act 1996'
Must Read