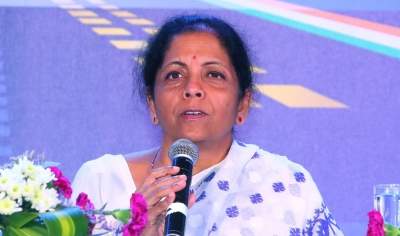 New Delhi (IANS) In a bid to counter criticism over the slowdown, Finance Minister Nirmala Sitharaman on Tuesday stressed on seven economic indicators and data to show that the Indian economy is stable and said that green shoots for its revival are clearly visible and would ensure that growth picks up from here.

In her reply to the debate on the Budget in the Lok Sabha, Sitharaman said that seven indicators clearly point to revival of the economy and would ensure that growth momentum picks up.

"The economy is not in trouble," she said.

Sitharaman cited the increase in foreign direct investment (FDI) and foreign portfolio investment (FPI) in the current fiscal and the recent rise in collection of Goods and Services Tax (GST) as among the "green shoots" for the economy.

She highlighted the FDI and FPI numbers to show strong global sentiments regarding the Indian economy.

"I want to highlight if anything just 7 of those important indicators which show that there are green shoots in the economy.

"The first thing is the global sentiment is in favour of India. Foreign investors continue to show confidence in India and therefore the country has attracted a net FDI of $24.4 billion in April-November 2019-20, as compared to $21.2 billion during the same period of 2018-19," she told the house.

She noted that the net FPI during April to November was positive at $12.6 billion against $8.7 billion during the corresponding period of last fiscal.

The Finance Minister, who has been struggling with the recent slowdown across the economy, observed that the gross GST revenue collection in January 2020 stood at Rs 1,10,828 crore and that during April-January, gross GST collection surpassed Rs 1 lakh crore six times, which she referred to as an indicator of increased activity.

She also cited the rise in PMI manufacturing index to show an improved industrial activity in the country.

The IHS Markit India Manufacturing PMI reading rose from 52.7 in December to 55.3 in January, its highest level in just under eight years.

Sitharaman also spoke about the rise in the foreign exchange reserves of the country and on investments, said that the proposed natinal infrastructure pipeline would help in bringing in foreign investment into brownfield projects.