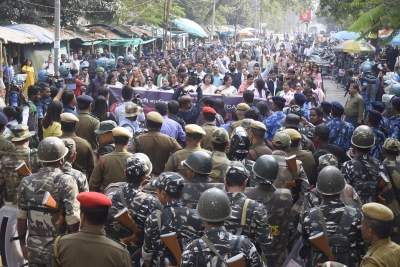 Guwahati- (IANS) Amidst the intense protests against the Citizenship Amendment Act (CAA) in Assam, is the northeastern state moving towards a new political alignment in the form of a regional formation that could challenge the ruling Bharatiya Janata Party (BJP) while cutting into the popular appeal of the Asom Gana Parishad (AGP)?

The speculation emanates from the comments of a senior functionary of the All Assam Students Union (AASU), which gave birth to the AGP 34 years ago after the historic Assam Accord that ended a six-year volatile anti-foreigner agitation which is often described as an important milestone in the Assamese people's search for their own identity.

AGP stalwarts, former Chief Minister Prafulla Mahanta, the late Bhrigu Phukan and current state Agriculture Minster Atul Bora, were all products of the movement and after the Assam Accord they left AASU to form the political outfit.

AASU, which had led the anti-foreigners' movement in the 70s and 80s, is now spearheading the anti-CAA agitation.

According to its President Dipanka Nath, people were asking the AASU if they could have an alternative to the AGP, which "has betrayed us".

Nath's comments came at the protest meet, "Concert for Peace and Harmony" on Sunday.

Nath also called the Congress "bad for us", following which iconic singer Zubeen Garg said that "we'll have our own party".

According to the AASU leadership, a dialogue was on with the cultural personalities, who have played a key role in crucial junctures of Assam's socio-political history, with the artistes' forum Silpi Samaj playing a pivotal role in the current agitation.

The AASU leadership is also believed to be gauging the pulse of the people before going ahead with the move, though it has no plans to shed the union's apolitical character.

The move comes at a time when the BJP government in the state is seemingly going through one of its toughest times in terms of popularity with many leading lights of the civil society and Assam's cultural world joining the protests.

The handling of the agitation, which saw four people die of bullet wounds following police firing, has only added to Chief Minister Sarbananda Sonowal's discomfort.

According to a political analyst, the Sonowal regime has so far got good grades for its clean image, but apart from that it has not particularly distinguished itself in other areas of governance.

There are many who feel that Sonowal has not been as effective as an administrator as he was perceived to be before he took over the reins of the government.

As for the AGP, a rebellion could be brewing in its ranks with some party leaders calling for the resignation of the outfit's members in the Sonowal government in the backdrop of the centre enacting the CAA.

Since the formation of the BJP-AGP coalition government, the relations between the two parties have not been particularly smooth on a host of issues. And now, the AGP leadership has come under heavy firing from the protesters for voting for the Citizenship Amendment Bill in the Parliament.

As such, many feel this could be the best of times for a new regional combination to take off and make its presence felt in the state's political landscape.