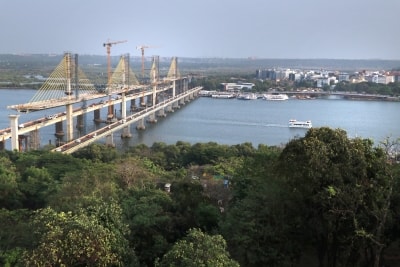 New Delhi (IANS) The spectre of rollback of large scale infrastructure projects worth Rs 2 lakh crore is looming over Maharashtra which may be a redux of Andhra Pradesh and in the eventuality also cause grave damage to the already faltering Indian economy's growth.

While the new Maharashtra Chief Minister Uddhav Thackeray has indicated a review of projects initiated by the previous government led by Devendra Fadnavis, the BJP is now raking up the issue and insinuating collateral issues.

Kirit Somaiya, Vice President, Maharashtra BJP, raised this issue On Wednesday and questioned the intention of the coalition government of Shiv Sena, NCP and Congress.

"What is the intention of New Maharashtra Govt to stay all infrastructure projects of more than Rs 2 lacs crores?? Sending Signal to Contractors?? Who will be responsible for delay & cost escalation???," Somaiya said in a tweet.

Somaiya told IANS that ministers of the government are making statements about staying the infrastructure projects in Mumbai like roadways, Metro and Mumbai-Nagpur Samrudhi Corridor.

The BJP has said that the government should not take steps which will cause delays. "We have asked for a clarification from the government on this, which is likely to come soon," he told IANS.

There are reports that Chief Minister Uddhav Thackeray has directed a review of all projects approved by the Fadnavis government in the last six months.

Thackeray is also learnt to have directed government officials to not clear payments for the projects till clearance is given.

There has been massive acrimony and bitterness between BJP on one side and Shiv Sena on the other as the two parted ways after the election and now Shiv Sena is in the driver's seat. Similarly, Congress and NCP are itching to get back at the BJP.

Immediately after taking over as CM, Thackeray announced that the Metro shed at Aarey Colony has been put on hold. The project had become hugely controversial.

The Maharashtra developments are a sense of dï¿½jï¿½ vu given the recent quashing of several projects in Andhra Pradesh by Chief Minister Jagan Reddy. In some cases, these were projects with foreign participation and investments which has caused ripples among the fraternity.