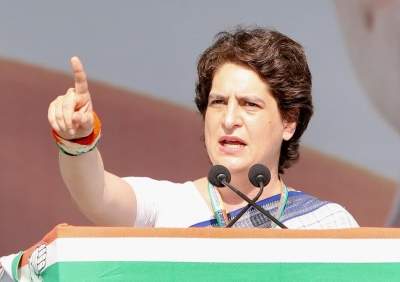 New Delhi (IANS) The Congress in Uttar Pradesh has doubled its vote percentage even though it failed to win a single seat in bypolls in 11 seats.

The Election Commission said that the Congress got 11.6 per cent of votes.

The party contested on all 11 seats but could not win one. Congress General Secretary Priyanka Gandhi said "I am happy that vote percentage of Congress has improved."

Party spokesperson, Rajiv Tyagi said that "This is because of Priyanka Gandhi, Congress is raising issues related to the people and the public has acknowledged the efforts of the party."

The Congress has raised many issues including the Sonbhadra killing of tribals. The party also led a campaign on the Chinmayanand case and Unnao rape survivor case. The aggressive stance pushed BJP on the backfoot, said Tyagi.

The UP Congress has just ended its three-day workshop in Rae Bareli. The party is devising a strategy to take on the BJP. Priyanka Gandhi has advised its office bearers to gear up for a street fight to counter the BJP government in the state.

Previous ArticleSC asks govt how long restrictions will continue in J&K
Next Article Heavy rainfall throws out of gear in state, Ranchi records more than 30 mm of rainfall
Must Read