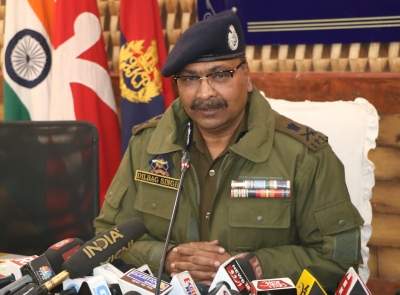 Srinagar (IANS) Jammu and Kashmir Director General of Police (DGP) Dilbag Singh on Wednesday asserted that the erstwhile state is on the edge of normalcy, with restrictions almost lifted from most of the districts.

"We are very close to normalcy. If you take the entire state into account, all 10 districts of Jammu have become absolutely normal. All schools, colleges and offices are open. People are doing their jobs without any problem," he said in a press briefing after Lashkar-e-Taiba militant Asif Maqbool Bhat was killed in a shootout with police this morning.

The DGP said that the situation in Leh and Kargil districts were also normal.

"I have visited Leh and Kargil. Total normal life is being seen there. There is absolutely no restriction there. In those regions also we have been gradually trying to ease out the restrictions whichever were imposed."

Singh said over 90 per cent area are free of restrictions and 100 per cent of the telephone exchanges are functioning now in the region.

All the telephone exchanges were opened from the night from September 4, as per J&K's Department of Information and Public Relations.

The Central government had imposed communication restrictions in the Valley, by clamping down upon landline, mobile and internet connections, after special status was withdrawn on August 5.