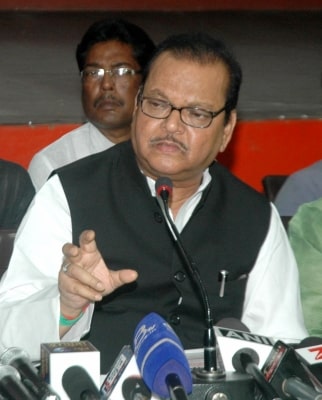 Ranchi (IANS) Congress has announced names of three of the seven candidates from Jharkhand for the 2019 Lok Sabha polls.

The party has fielded former Union Minister Subodh Kant Sahay from Ranchi, Sukhdeo Bhagat from Lohardagga and Geeta Koda from the Chaibasa seats. Geeta Koda and Sukhdeo Bhagat are legislators in the state assembly.

As per the seat-sharing between the parties in the opposition Grand Alliance, the Congress will contest in seven of 14 Lok Sabha seats.

Geeta Koda is wife of former Chief Minister Madhu Koda. Madhu Koda had hogged the limelight for two reasons. He became the Chief Minister of Jharkhand in September 2006, despite being an independent legislator, with support from the JMM, Congress and RJD.

The second reason for Koda's coming into limelight was the corruption charges against him.

It is alleged that Koda and his associates were involved in a Rs 4,000 crore scam. The Income Tax Department had raided his premises in 2009, and he was later sent to jail. He is facing cases registered by the CBI and the Enforcement Directorate (ED).

Madhu Koda had floated his own party and fought the 2009 polls, when he was elected to the Lok sabha from the Chaibsa seat. His wife became the legislator from the Jagannathpur assembly seat in 2009.

The BJP accused the Congress of promoting corruption in the politics.

" Everybody knows how Madhu Koda plundered the state as the Chief Minister. As he cannot fight polls fearing conviction, Congress is banking on his wife to get a Lok Sabha seat in the state," BJP spokesperson Rabi Bhatt told IANS.

The Congress refuted these charges and said that Geeta Koda is a two-time legislator and she has been given the ticket considering her political carrier and her popularity with the voters.