Plans are no longer in papers and files, they are being implemented on the ground says Chief Minister 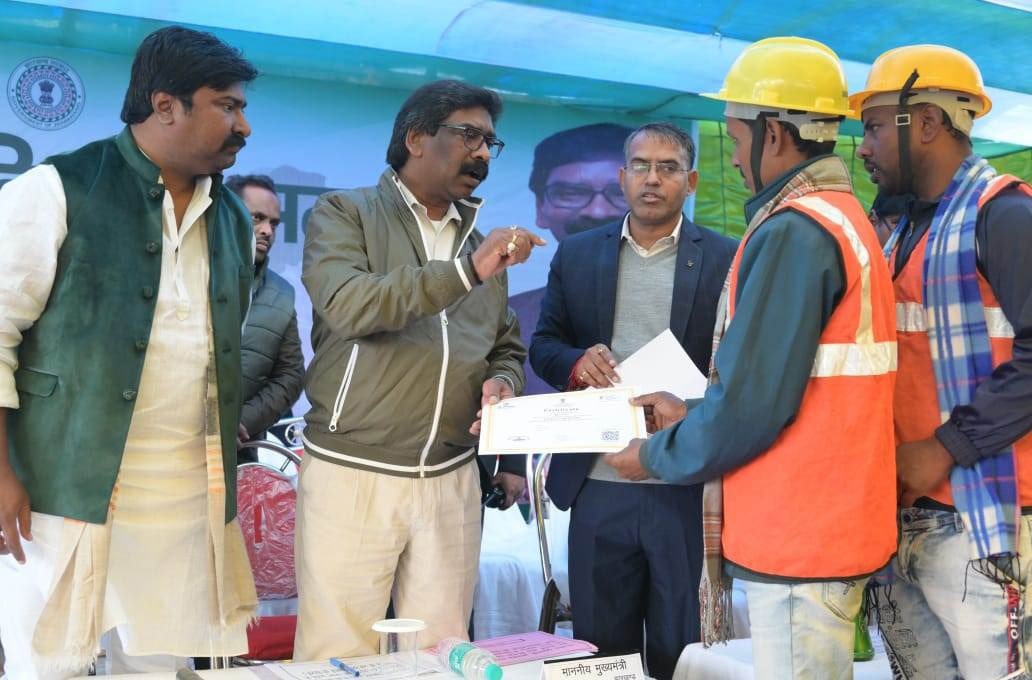 Sahibganj: Chief Minister Hemant Soren said that it is the resolution of the government to increase the socio-economic-educational and intellectual capacity of the villagers and many welfare schemes are being run for this purpose.

Addressing the asset distribution function at Dharampur in Pathna he said that the government is moving forward with the aim of reaching the doorsteps of those for whom these schemes are meant. He said that now the schemes will not be confined to papers and files and are being put on the ground. He said that the government is keeping a close watch on the implementation of these schemes so that every needy and poor can get its benefit.

The Chief Minister said that thousands of camps were organized across the state under the Aapki Yojna Aapki Sarkar Aapke Dwar programme and through these camps, problems of lakhs of people were solved and schemes were linked. He said camps will be organized again so that those who are deprived they can get their rights and entitlements.

The Chief Minister said that the government is doing the work of strengthening the rural environment. He said that amid all the challenges the government has taken a resolution to free the rural areas from the curse of backwardness.

Expressing concern, he said that on one hand, we are talking about going to the moon, on the other hand, there are many problems like poverty, backwardness, unemployment and malnutrition in rural areas. It has been 22 years since the formation of a separate state but, rural areas are still untouched by the development he said adding that the condition of the villages and villagers was neither noticed by the government nor any meaningful effort was made to bring them into the mainstream.

But his government is making continuous efforts in the last 3 years towards strengthening the rural system. In this direction, various schemes have been started for all sectors including education, health and employment. On the other hand, social security schemes like Sarvajan Pension Yojana are working to provide economic security cover to the people.

The Chief Minister said that the government is making efforts to make the villagers financially capable and self-reliant. In this episode, many schemes like Mukhyamantri Pashudhan Vikas Yojana, Birsa Harit Gram Yojana, Didi Bari Yojana and Chief Minister Employment Generation Scheme have been started. He said that the people should be associated with these schemes and also create awareness to connect others as with this they will become self-reliant and rural areas will also be strengthened.

He said that as a result of the policy being decided for agriculture today farmers are forced to leave agriculture and work as labourers. If the farmer does not grow the crop then how will the livelihood go on. In such a situation his government is working towards solving the problems of the farmers and making schemes in their interest. The resolution of his government is to connect the farmers with the fields he said.

Hemant Soren said that it is the effort of his government to provide employment to the people in the village itself so that they do not migrate. He said that the government has made many schemes for the workers. To take advantage of these schemes they must register themselves on the portal of the Labor Department. He said that labourers are being provided work according to their skills.

Apart from this, there is also a provision for pension for workers, scholarship scheme for the education of their children. Moreover if the worker dies in an accident, then there is a provision to provide financial assistance to his dependents from the government.

The Chief Minister told the girls covered under the Savitribai Phule Kishori Samriddhi Yojana that they must study and never leave their studies under any circumstances as the government has started many schemes for your studies. If you want to do coaching for IAS, JPSC, Banking or other competitive exams, then the government will pay for it. Not only this, the government will also bear the expenses incurred in studying courses like medical, engineering, law.

Along with this, the government has made a provision to provide an amount of up to Rs 15 lakh for the students and for those who want to do self-employment, the government is also running a scheme to provide financial assistance under the Chief Minister’s Self-Employment Scheme.