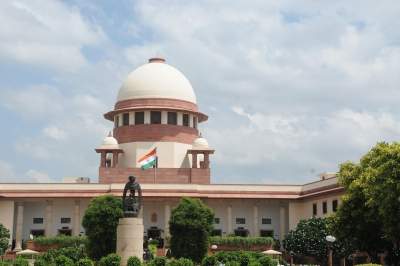 New Delhi (IANS) Amid public outcry over the delay in execution of death penalty given to four convicts in Nirbhaya case, the Supreme Court on Thursday stayed the death warrant issued by a Gujarat court in the execution of a 22-year-old man convicted in the rape and murder of a three-year-old child in Surat in 2018.

A bench headed by Chief Justice S.A. Bobde and comprising Justices B.R. Gavai and Surya Kant stayed the death warrant as it was issued before the limitation period. The Chief Justice observed that court judgements should be strictly complied with while issuing death warrants.

The observation from the top court gains significance in the backdrop of the Nirbhaya case where lawyers for convicts contend they should be given a chance to exhaust all their legal remedies.

The top court queried the state counsel as to how an order of this kind could be passed despite a reported order of the Supreme Court on a similar issue in the Amroha murder case.

According to the law, a challenge against the death sentence can be filed within 60 days. However, in this case, the death warrant was issued merely 33 days after the High Court's order.

The convict's lawyer argued before the court that the lower court judge, who issued the death warrant, hurriedly issued direction without giving the convict the mandatory 60 days to file appeal in the top court after the High Court confirmed the death sentence.

The Chief Justice said, "How could such death warrant be issued when there is a judgment of this court in Shabnam vs State of UP?"

This judgement says death row convicts have to be given sufficient time to avail of legal remedies, and unless they exhaust them, execution of the death penalty cannot take place.

The Gujarat High Court on December 27, 2019, upheld the conviction of the accused. Anil Yadav was convicted in the criminal case by an Additional Sessions Court in July 2019.

The victim had gone missing from her home. Her corpse was recovered in a plastic bag. Yadav, who lived in the neighbourhood, initially joined the search for the child, but later disappeared. The police arrested him from Bihar.

Yadav was convicted on the deposition of over 30 witnesses, besides medical and circumstantial evidence.

Previous ArticleSchool principal in UP advises on cheating, gets arrested
Next Article India hits back at China over Shah's Arunachal visit
Must Read