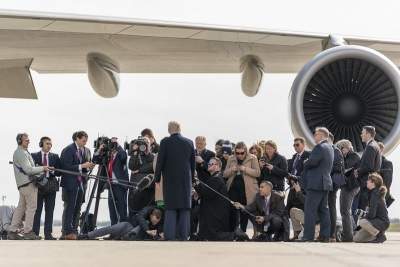 New York (IANS) US President Donald Trump has indicated that a full-fledged trade agreement with India was unlikely during his visit there next week -- or even this year -- but a "very big one" was in the offing.

"I don't know if it'll be done before the election, but we'all have a very big deal with India," he told reporters at Joint Base Andrews in Maryland on Tuesday when he was asked about the likelihood of it during the visit to India.

But he left room open for a symbolic preliminary agreement.

He said, "I'm really saving the big deal for later on. We're doing a very big trade deal with India. We'll have it."

Trump's assertion that a trade deal may not be done "before the election" in November could be meant to goad India into making concessions to complete it soon.

Complaining about the progress of the trade deal negotiations, he said, "We are not treated very well by India."

He quickly added, "But I happen to like Prime Minister (Narendra) Modi a lot."

Trump, who is into show and pomp, sounded eager about the trip encouraging reporters to come along telling them, "It's going to be very exciting; I hope you all enjoy it."

Referring to the main programme in Ahmedabad of inaugurating the Sardar Vallabhai Patel Stadium, he said that Modi "told me we'll have seven million people between the airport and the event."

All agog, he repeated the number of the welcoming crowd: "But he says between the stadium and the airport, we'll have about seven million people."

US Trade Representative Robert Lighthizer is not going on the trip to India with Trump, which was already an indication that a full-fledged trade pact more than a year in negotiations was not going to be signed.

One of the final sticking points is India's proposed law modelled on European legislation to require financial companies like credit card issuers to store data in India.

With the proposed law before Parliament, it would be difficult for Modi to agree to the US demand that there should be no such provision.

Another is with the Indian restriction on importing dairy products from animals fed with offal -- the leftover products from the butchery of animals.