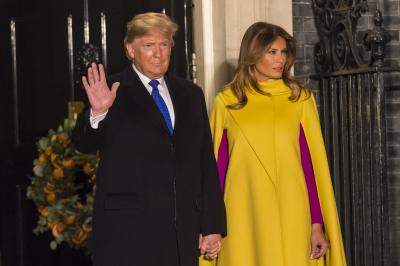 Gandhinagar (IANS) Ahmedabad city is gearing up for the maiden visit of US President Donald Trump and First Lady Melania Trump with top-grade security being put in place. Areas the the top dignitaries would be visiting or passing by along with Prime Minister Narendra Modi will be guarded by National Security Guard commandos' anti-sniper units.

Prime Minister Narendra Modi will be inaugurating the world's largest cricket stadium at Motera. The stadium, being built at a cost of Rs 800 crore, has a capacity to hold 1.25 lakh spectators and is on the verge of completion. The Trump visit event at Motera, a neighbourhood in the northwestern part of Ahmedabad, has been named 'Kem Chho Trump'.

The US dignitaries will also be visiting the Gandhi Ashram at Sabarmati. They will arrive at the Ahmedabad airport and will be taken to the Ashram, and then to the Motera stadium. The journey along the route has been converted into a road show where the dignitaries will be welcomed by people. Various tableaux depicting the cultural heritage of the country have been arranged.

"The entire vicinity of the airport area, the roadshow, the Sabarmati Ashram and the Motera stadium will be supervised by the Ahmedabad police. More than 25 IPS officers, 65 Assistant Commissioners of Police, 200 police inspectors, 800 police sub-inspectors and around 10,000 police personnel will be deployed. Teams of Special Protection Group (SPG) have already arrived in the city and are reviewing the security. The NSG's anti-sniper units will place themselves at strategic locations. The Bomb Detection and Disposal Squad (BDDS) units have already started their anti-sabotage checking," Deputy Commissioner of Police Vijay Patel told media.

"A guard of honour will be given to the US President and the First Lady when they arrive at the airport. From the airport the dignitaries will go to the Gandhi Ashram at Sabarmati and then they will be taken to the Motera stadium," said Patel.

The entire stadium and the area within the 1.5 km radius of the stadium have been fortified. Outside this radius, 28 parking spaces are allotted for visitors. District delegations have been assigned specific routes right from their places to the stadium. The Ahmedabad police in coordination with the Special Protection Group, state Intelligence Bureau and secret services has planned elaborate arrangements," said Patel.

"We request the people to cooperate with the police in maintaining security arrangements," said Patel.

The 'Kem Chho Trump' is reciprocation of the Indian Prime Minister Narendra Modi's welcome event in the US, 'Howdy Modi' which took place in Houston, Texas, last year.

Previous ArticleUS to sign peace deal with Taliban, withdraw forces over 18 months
Next Article Rainfall once again predicted on Feb 20
Must Read