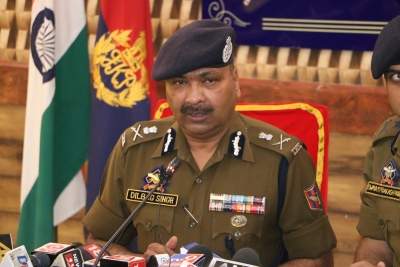 Srinagar (IANS) Militants belonging to different outfits in Kashmir are jointly carrying out attacks on the security forces, Director General of Jammu and Kashmir Police Dilbagh Singh said at a press conference here on Wednesday.

Citing Wednesday morning encounter, Singh said the two militants killed have been identified as Zia ul Rehman belonging to the Lashkar-e-Taiba, and Khateeb belonging to the Hizbul Mujahideen and Fayaz Umar who was injured and later arrested belonged to JKIS.

"The militants belonging to different outfits have been working together for a long time now," Singh said.

On Wednesday, one CRPF man was killed and two militants were gunned down by the security forces and a third militant was injured after their motor cycle was halted by a police party on the highway.

A large quantity of arms and ammunition including two pistols and grenades were recovered from them.

"Three people were riding a scooter, the person sitting in the rear got down and resorted to firing, one CRPF man was hit in the head but he fired back," Zulfikhar Hassan, Additional DG CRPF said. "Two militants died and a third one was arrested, sophisticated arms and grenades were recovered from them," he said.

Dilbagh Singh said there was a heavy rush on highway but security forces maintained great caution to ensure there was no collateral damage.

Singh said this year many successful anti-militancy operations were carried out and many militant modules were busted.

"20 militants have so far been killed this year, he said.

Previous ArticleNirbhaya convicts should be hanged together: HC
Next Article India aims at Rs 35,000 cr military exports in next 5 yrs: PM
Must Read