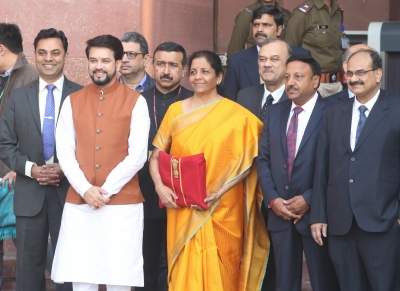 Washington (IANS) The US-India Strategic Partnership Forum (USISPF) hailed the Union Budget 2020 presented by Finance Minister Nirmala Sitharaman, however, it said that the budget could have gone further to liberalize some sectors.

"USISPF is pleased to see a focus on inclusive growth, aspirational India, ease of living for all citizens, and digital technologies for economic growth in the 2020 Union Budget . However, we believe the budget could have gone further to liberalize sectors such as insurance that are in need capital. Despite a slowdown in growth, the global outlook for investment in India remains strong and therefore the budget was a great opportunity to convert the global sentiment into action," said Mukesh Aghi, USISPF President and CEO.

He said that on corporate taxation, it is pleasing to see the elimination of the dividend distribution tax.

"On ease of doing business, measures such as simplified GST returns, no audit requirement for MSMEs with up to Rs 5 crore turnover, instant issuance of PAN by furnishing Aadhaar, pre-filing of tax returns, faceless appeals and assessments will further enhance India's image from an ease of doing business perspective. Together, these steps show that India's tax policy is moving in the right direction," Aghi said.

Aghi said provisions such as creation of an "Investment Clearance Cell" to facilitate investment advisory and continued focus on smart cities projects and electronics manufacturing will play an important role in growing the Indian economy and creating much-needed jobs.

However, the USISPF also urged the government to move away from further tariffs on ICT products in the budget.

A statement released by the USISPF said the measures to boost infrastructure spending, creation of national logistics policy and modernisation of India's connectivity is encouraging as it is one of the areas where American companies can contribute significantly.

The USISPF also applauded the announcements of the government such as focus on digital infrastructure, deferring the tax payment on ESOP granted to employees for the startups and increasing the revenue threshold to Rs 100 crore for claiming profit exemption for a period of three years out of first 10 years.

"E-commerce is a bright spot of the Indian economy and expected to touch US $84 billion by 2021. We therefore, urge the government reconsider its decision to impose 1 per cent TDS on e-commerce. This creates differential treatment of sellers on these platforms and the burden will be ultimately passed on to the consumer," the statement read.