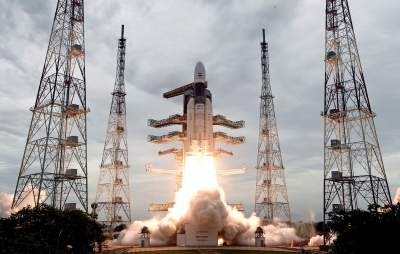 The Ariane 5 rocket lifted off from the spaceport in French Guiana.

Curiously, even though India has its own rocket Geosynchronous Satellite Launch Vehicle Mk III (GSLV-Mk III) with a carrying capacity of four tonne, India used Arianespace to put into orbit its GSAT-30 weighing about 3.3 tonne.

The GSAT-30 will provide high-quality television, telecommunication and broadcasting services ensuring continuity of service for INSAT 4A satellite.

"This was an excellent start of 2020 with an excellent launch using Ariane 5 - the most reliable launcher, P. Kunhikrishnan, the Director of ISRO's U.R. Rao Satellite Centre was quoted as saying in the statement.

"On behalf of the ISRO Chairman, I want to thank Arianespace for a wonderful and professional job - both in the preflight preparations and during the launch," he added.

By operating GSAT-30, ISRO will - once again - use space to help bridge the digital divide in the Indian subcontinent as part of its ambitious space programme.

Meanwhile, ISRO Chairman K. Sivan in a statement said: "GSAT-30 has a unique configuration of providing flexible frequency segments and flexible coverage. The satellite will provide communication services to Indian mainland and islands through Ku-band and wide coverage covering Gulf countries, a large number of Asian countries and Australia through C-band."

The GSAT-30 was the 24th ISRO satellite orbited by Ariane-series launchers, tracing the relationship back to India's APPLE small experimental communications spacecraft, lofted in 1981 by an Ariane 1 version, said Arianespace.

According to Arianespace, the Friday's successful launch kicks off its busy launch schedule in 2020, which targets a record mission count - with up to 12 opportunities identified from Europe's Spaceport in French Guiana using Ariane 5, Soyuz or Vega; along with the maiden flights of Ariane 6 and Vega C; plus eight more from the cosmodromes at Baikonur and Vostochny.

This is to be followed by another February mission - Ariane 5's Flight VA252 from French Guiana - carrying JCSAT-17 for SKY Perfect JSAT and GEOKOMPSAT 2B for the Korea Aerospace Research Institute (KARI).