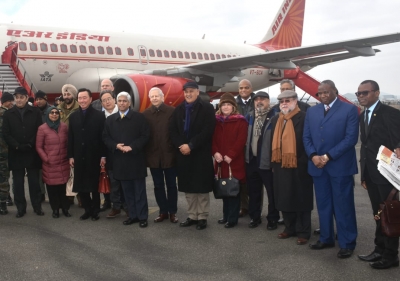 New Delhi/Srinagar (IANS) On a day when mercury had dipped to 2 degree Celsius, 17 envoys, dressed in their tweed jackets and cashmere mufflers, took pictures and selfies in the backdrop of Zabarvan hills in the summer capital of the newly formed union territory of Jammu and Kashmir.

The group of envoys representing 17 countries arrived in Srinagar on a two-day trip to Kashmir on Thursday, to get a first-hand experience of the situation since the special status of Jammu and Kashmir state was revoked.

The government anticipated Pakistan-sponsored terror attacks and street violence in view of the threats issued by separatists and terror groups ahead of the decision.

Markets and educational institutions were shut for a couple of months in the valley after separatists and terror groups gave calls against restoration of normalcy.

However Kashmir since August 5, except for a few civilian killings by terrorists, has been mostly calm and peaceful. Although most communication services have been restored, the mobile Internet still remains suspended.

Markets, institutions and traffic were running normally on Thursday when the delegation of envoys arrived in Srinagar. Sources said, the common people whom the envoys met told them that though initially there were difficulties but they were relieved that there was no bloodshed and violent protests.

Common people also told the envoys that they were appreciative of the government's handling of the situation since the nullification of Articles 370 and 35A, sources said. The envoys were also asked to put pressure on Pakistan to end cross-border terrorism in Kashmir.

Official sources said, the government decided to organize the trip for the envoys because of several requests received by the Ministry of External Affairs. The Centre approved the request after analyzing the security situation and consulting the state administration.