I am not Rahul Savarkar, I won't apologise: Rahul 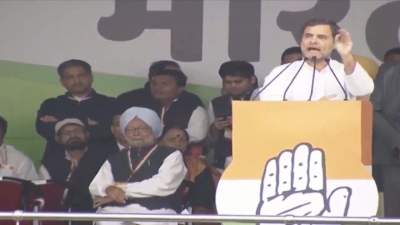 New Delhi (IANS) Former Congress President Rahul Gandhi on Saturday refused to apologise over his "Rape in India" remark and mocked Sangh ideologue V.D. Savarkar and said, "I am not Rahul Savarkar and I will not apologise for speaking the truth".

Rahul Gandhi also accused the Prime Minister of burning the northeastern states and West Bengal over the controversial Citizenship Amendment Act, that was signed by President Ram Nath Kovind on Thursday night, a day after it was passed in Rajya Sabha.

Addressing the 'Bharat Bachao' rally here at Ramlila ground here, Rahul Gandhi said, "Yesterday in Parliament, the BJP people asked me to apologise. But I want to tell them that I am not Rahul Savarkar, I won't apologise. I won't apologise for speaking the truth."

The Congress MP from Kerala's Wayanad instead demanded apology from Prime Minister Narendra Modi and Union Home Minister Amit Shah to the country.

The Lok Sabha on Friday burst into fierce attack by treasury benches on Rahul over his "Rape in India" remark, with all BJP members condemning the statement and seeking his apology.

Lamenting at the government over the economic crisis, Rahul said, "The strength of this country was its economy, many countries looked at us and they wondered how we reached at 9 per cent GDP. And now today even onion is being sold at Rs 200 a kg.

"The economy of India has been destroyed single handedly by Modi," he said.

Slamming the Prime Minister for demonetisation and faulty implementation of the GST, Rahul thundered, "You must remember he came on TV at 8 p.m. in 2016 and made Rs 500 and Rs 1,000 currency notes illegal tender. He hit the Indian economy so hard that it has been unable to recover since then."

He also alleged that the government has waived loans to the tune of Rs 1.45 lakh crore of the industrialists.

Accusing the BJP of working like the enemy of the country, the Congress leader said, "All the enemies of the country wanted to destroy Indian economy and that work has been done by Modi."

"Our enemies cannot do the damage to our economy but out Prime Minister can do it," he alleged.

Referring to violence in the northeast and in West Bengal after the passage of CAA and the condition of Jammu and Kashmir after the revocation of Article 370, he said, "Go to Jammu and Kashmir, Assam, Nagaland, Tripura. They are burning. The government works to divide and weaken the country."

"For power, Modi can do anything," he alleged, adding that Modi is concerned with his own image only.

Rahul Gandhi also attacked the BJP and said that you people elected Modi to make the economy stronger five months ago. "You elected him to make the country stronger, but he didn't work on that. Now our GDP is at 4 per cent, farmers are committing suicides. I asked in Parliament how many farmers committed suicide and they said they don't know. They know only one thing and that is to divide the country," he added.

Rahul Gandhi appealed to the party workers to raise the voice against the government to save the country.