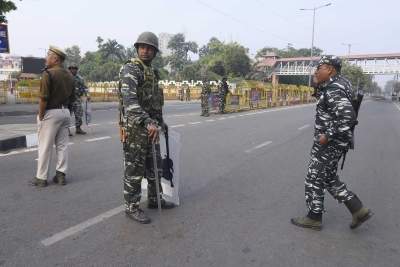 Guwahati (IANS) An indefinite curfew which was imposed in Assam's Dibrugarh municipal area, was relaxed for five hours on Friday, while the Army and security forces have continued flag marches in Guwahati city, a day after two persons were killed during the violent anti-Citizenship (Amendment) Bill (CAB), 2019 protests.

Sources said that the curfew in the Dibrugarh municipal area has been relaxed from 8 a.m. to 1 p.m.

There were no reports of further violence from Guwahati where cultural personalities and civil society members were on fast for 10 hours following a call given by the All Assam Students Union, which is leading the protests.

On Thursday, thousands of people defied the curfew and took to the streets as the raging agitation saw the house of an MLA and a Circle Officer being set ablaze, while the government removed two key police officers.

The two protestors with bullet wounds were taken to the Guwahati Medical College and Hospital, where one was declared dead before the other succumbed while being treated. At least 11 others were injured during the protests.

The authorities also extended the suspension on Internet services for another 48 hours. Most airlines have also cancelled flights to and from Dibrugarh and Guwahati, and train movement was halted.

In an appeal to the people, Chief Minister Sarbananda Sonowal called for maintaining peace and calm.

As per the Bill, members of Hindu, Sikh, Buddhist, Jain, Parsi and Christian communities who have come from Pakistan, Bangladesh and Afghanistan till December 31, 2014 and facing religious persecution there will not be treated as illegal immigrants but given Indian citizenship.

The legislation was passed by the Rajya Sabha on Wednesday and by the Lok Sabha in a midnight sitting little past Monday.

It got President Ram Nath Kovind's nod on Thursday night