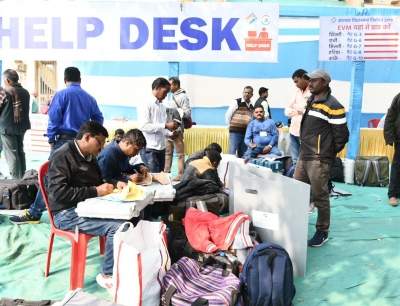 Ranchi (IANS) Jharkahnd recorded 13.05 per cent voting till 9 a.m. in the third phase of polling on Thursday. The voting for 17 Assembly seats commenced at 7 a.m., amidst tight security.

The Silli assembly witnessed highest polling with 16.35 per cent and Dhanwar remained lowest with 7.57 per cent.

While the polling exercise on five seats - Ranchi, Hatia, Kanke, Ramgarh and Barkatha will continue till 5 p.m., voters in the remaining constituencies will be able to cast their franchises till 3 p.m. only.

There are a total of 309 candidates including 32 female whose fate will be decided by 56,06,743 voters including 26,73,991 female and 95 third genders. These 17 seats are spread across Ranchi, Hazaribagh, Chatra, Giridih, Bokaro, Koderma and Saraikela.

Of the 17 seats, BJP, JMM and Congress had won 10, three and two seats respectively in 2014 Assembly elections.