Northeast on the boil for the third day over CAB 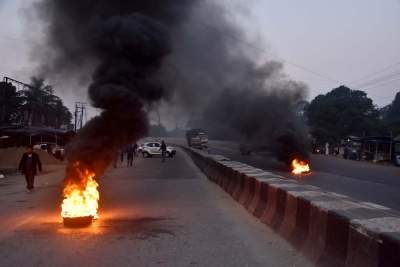 Agartala/Guwahati (IANS) Agitations in northeast India against the Citizenship (Amendment) Bill continued for the third consecutive day on Wednesday with various parties and NGOs including the North East Students' Organisation (NESO) urged the central government to "respect the sentiments of the people of the region".

A six-member delegation of the Indigenous People's Front of Tripura (IPFT), junior ally of the ruling BJP, went to Delhi on Wednesday to hold an urgent meeting with Union Home Minister Amit Shah on the contentious Bill, which was passed in the Lok Sabha on Monday.

In view of the agitations, examinations in schools, colleges and universities were postponed in Assam, Tripura, Mizoram and Meghalaya.

The Northeast Frontier Railway, which operates trains in some parts of Bihar and West Bengal besides entire northeastern region, either cancelled or rescheduled many trains including Humsafar Express and Kanchanjunga Express.

The influential North East Students' Organisations (NESO), a conglomerate of eight students and youth bodies, spearheading the agitations against the CAB in the entire northeast region, has said that they would soon announce their next course of action on the issue.

NESO Chairman Samuel B. Jyrw and General Secretary Sinam Prakash Singh in a joint statement said that in spite of the widespread protests in the entire northeast India, the government has passed this bill in the Lok Sabha and is trying to pass it in the Rajya Sabha as well.

"That only goes to show that the government of India has no regard for the indigenous people of the region, but rather this move is intentionally done to reduce the aboriginal people of the northeast to a minority in their own land. The total success of the 10-hour long strke on Tuesday in the region, only goes to show that the entire northeast is united in spite of the government trying to implement the divide and rule policy," the statement said.

In Assam, protests erupted in different parts of the BJP-ruled state on Wednesday with the security forces resorting to lathi-charge in Dispur, Guwahati, Dibrugarh and Jorhat to disperse the protesters.

At least 25 protesters including women and some journalists and television crews were injured in the lathi-charge and clashes. The agitators are mostly youths and students.

Normal life in many parts of Assam was badly affected due to the agitations and cancellations of many trains and buses besides shutting down of shops and business establishments.

Though the senior police officials claimed that the situation in most parts of Assam is under control, huge tension is prevailing in Dibrugarh, Jorhat, Dispur and other places of the state.

A large contingent of police and central para-military forces led by senior police officials were deployed to deal with the situations.

In Tripura, the Joint Movement Against Citizenship (Amendment) Bill (JMACAB), a conglomeration of many tribal local and regional parties, NGOs and student and youth organisations of Tripura, led by Indigenous Nationalist Party of Tripura (INPT), Tripura's one of the oldest tribal based parties, held sit-in-demonstrations against the CAB in different parts of Tripura on Wednesday.

The mobile based internet services remain suspended across Tripura for the second day on Wednesday. Prohibitory orders under section 144 of the CrPc have been promulgated in some parts of West Tripura, specially in Sepahijala, Dhalai and North Tripura districts after Tuesday's violence, clashes and attacks.

Tripura Chief Minister Biplab Kumar Deb while talking to the media said that the agitations against the CAB are unnecessary and against the development of Tripura.

"Union Home Minister Amit Shah has already made it clear that with the enforcement of the CAB, no community or individual belonging to northeast region would be affected," said Deb, who also holds the home portfolio.

Debbarma said that Mevar Kumar Jamatia and other IPFT leaders held a meeting with NEDA convenor and Assam Finance Minister Himanta Biswa Sarma in Guwahati on Monday and urged him to take up the CAB issue with the Prime Minister and Union Home Minister.