No more tears, onion to bring cheers in New Year 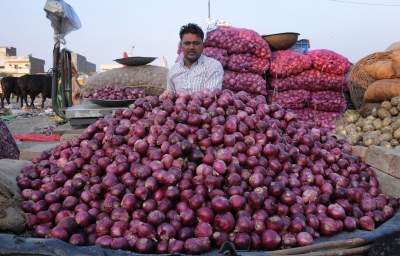 Mumbai (IANS) As onion prices crossed Rs 150 a kg in Mumbai and urban centres, and hovering around Rs 125 a kg in rural areas, the Agricultural Produce Marketing Committees (APMC) in Maharashtra said here on Saturday that new stocks have started trickling in the markets.

While the Solapur APMC welcomed around 700 trucks carrying some 7000 tonnes, the Pimpalgaon APMC got around 250 tonnes of onion from the farmlands.

Other APMCs have also reported arrival of onion in small quantities but it is still not enough to bring down the prices drastically.

"We got around 7000 tonnes onion today (Saturday) from neighbouring Karnataka, Tamil Nadu and Andhra Pradesh. It is being sold at around Rs 11,500 per quintal, and most of it will go to other states in east and north India," Solapur APMC Secretary Mohanrao C. Nimbalkar told IANS.

Pimpalgaon (Nashik) APMC Secretary Sanjay B. Patil said that though a trickle has started, it will increase over the next three weeks and by early January, the markets are expected to be flooded with onion.

"From first week of January, we are hoping most markets will get daily around 10-15 tonnes of Kharif onion which will virtually end the current shortages," Patil told IANS.

"Contrary to speculation in many quarters, the onion farmers have not benefited at all from the shortages or the spiralling prices. Actually, they have suffered huge losses due to unseasonal rains and floods this year, wiping off their last year's earnings. A big part of the crisis was owing to hoarders and unscrupulous middlemen," agricultural expert Kishore Tiwari, who is Advisor to CM, told IANS.

A Nashik onion farmer, Tatyaram Bholekar claimed that last year, he earned around Rs 1.75 lakh from his two hectares cultivation, getting him around Rs 5000 a quintal, or Rs 50 per kg, which was nearly half of his earnings the previous year.

However, though the prices have shot up in the past 2-3 months, reduced production, higher cost of inputs and the recent inclement weather have made it difficult to even recover their costs, Bholkar pointed out.

Both Patil and Nimbalkar said supplies fell drastically due to the onion crop getting damaged in thousands of hectares, which in turn spiked the prices - from around Rs 30-35 a kg in July to Rs 80-90 a kg in October and now Rs 125-150 a kg in December as the demand soared.

Tiwari said that after the government allowed imports of onion from other neighbouring countries and Europe, the hoarders have got scared and started offloading their stocks in the markets gradually.

"Unfortunately, imports have not helped much since the onion quality is vastly different from the domestic produce, and suited only for the hotel industry. Even they are complaining saying that their onion-based gravies turn dark and bitter quickly and cannot be stored for longer periods," Patil said.

Tiwari said that after complaints of hoarding were received, the Maha Vikas Aghadi government clamped down by imposing stock limits from 50 to 25 tonnes for whole-sellers and five tonnes for retailers in the state, and hoarders found indulging in the practice will face punishment.