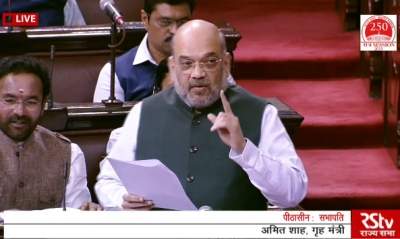 New Delhi (IANS) The Special Protection Group (Amendment) Bill, 2019 was passed in the Lok Sabha on Wednesday. According to the amendment the elite force will now only protect the Prime Minister and his immediate family residing with him at his official residence, and former PM and his kin residing with him at the residence allotted to him for a period of five years from the date he demits the office. The opposition termed the Centre's move a "vindictive approach" and "political vendetta" against the Gandhi family.

Rejecting the opposition's allegation, Union Home Minister Amit Shah said the Centre's purpose behind the SPG (Amendment) Bill, 2019 is not a "vindictive" approach as it is not the way of the Bharatiya Janata Party (BJP), but "it was the approach of Congress".

He said the reality is that the Bill, which seeks an amendment to the SPG Act, 1988, does not aim to remove the SPG protection of the Gandhi family and it restores the original intent of the Act.

Shah clarified that the Gandhi family's security has not been "withdrawn but it has been changed". "Gandhi family has been provided Z plus security cover under Central Reserve Police Force (CRPF) with ASL (Advance Security Liaison) and ambulance facility".

Shah's remarks came while responding to the members who participated in the discussion on the Bill which provides for the constitution and regulation of an armed force of the Union for providing "proximate security" to the Prime Minister and former Prime Ministers and members of their immediate families and for matters connected therewith.

As per the Bill, which was introduced in the Lok Sabha on Monday by Union Minister of State for Home G. Kishan Reddy, proximate security will be given by the force only to the Prime Minister and members of his immediate family if they live with him at his official residence.

The Bill came days after the government withdrew the SPG security cover provided to members of the Gandhi family - Congress President Sonia Gandhi and her children Rahul and Priyanka.

The Act was amended in 1991, 1994, 1999 and 2003 to extend SPG cover to the former Prime Ministers and their immediate family members also, for different periods after demitting the office of the Prime Minister.