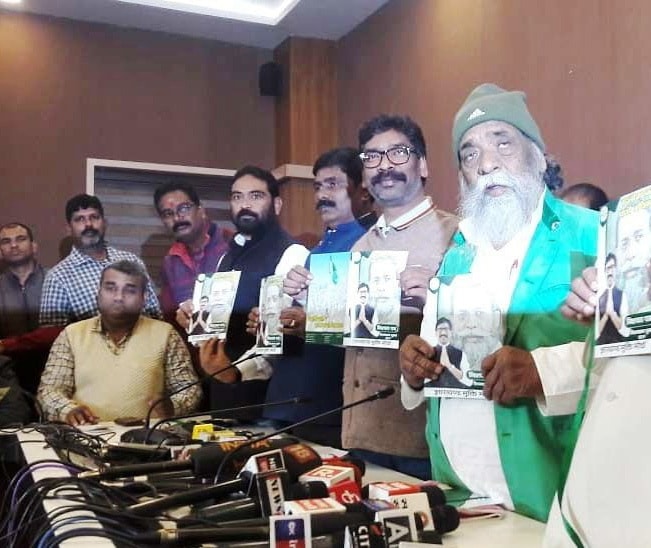 Ranchi: The Jharkhand Mukti Morcha promised to do away with the existing domicile policy of the state as it was not the reflection of the aspirations of the people of the state and has also promised to reserved 75 percent jobs for the ‘Jharkhandis’.

Party supremo Shibu Soren along with former Chief Minister and Leader of Opposition Hemant Soren released the manifesto which has been named as ‘Nischay Patra’ by the party at the press club here. Speaking on the occasion Hemant said that the party is of the belief that despite 19 years of state creation the people have not got their rights.

He said that through the manifesto the party was making a commitment to provide all those rights to the people which they have not received. “Providing employment to all, rights for the women and right share to the locals in the system was among the top priorities for the party,” he said adding that even changes in the present administrative system in Jharkhand is also on the top agenda for JMM.

The party in its manifesto has promised to make three more sub capitals in Palamu, Chaibasa and Hazaribagh while tender worth up to Rs 25 lakh will be given to locals only. It has also promised to give a loan waiver to the farmers and provide 50 percent reservation to the women in government jobs.

JMM has promised to provide government jobs to 5 lakh youth in the next two years and also provide unemployment allowance to the unemployed youth.

The party has said that if on the acquired land no work is done within 5 years than it would be returned to the landowners apart from that from primary to P hd the education of the girls will be free. Further, OBCs will get 27 per cent reservation in government jobs and all the birthplace of the martyrs will be developed as tourist spots.

JMM has said that it will give 100 units of free power, free of cost water connection to urban poor, develop Palamu, Chaibasa, Garhwa, Giridih, Dumka, Sahebganj and Deoghar as world level towns with an investment of Rs 25,000 crore while for setting small industries no license would be needed.