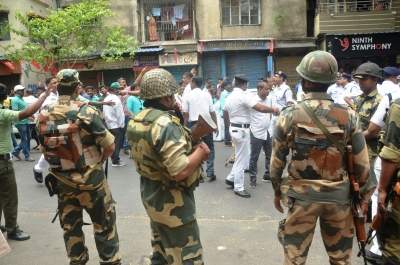 Kolkata (IANS) Three persons were injured in a clash between the Trinamool Congress and the BJP activists in Kharagpur town of West Midnapore district on Sunday, police said.

Local BJP leaders claimed all three were their workers. Two of the injured were hospitalised.

Both the parties accused the other of distributing largesse to woo voters on the eve of Monday's assembly by-poll in Kharagpur Sadar constituency.

"The Trinamool workers were distributing goods like rice, saree to entice the voters. When our workers tried to prevent them, they were mercilessly beaten up. Two of them are now in hospital with serious injuries,'" BJP West Midnapore district president Samit Kumar Das told IANS.

Das also accused the police of being hand-in-glove with the Trinamool.

On the other hand, a district Trinamool leader said people got agitated after the BJP workers started doling out money and other goodies to influence the voters.

"The incident is the fall out of the people's wrath," said the leader on anonymity.